The Comedies of Terence Literally Translated into English Prose, with Notes 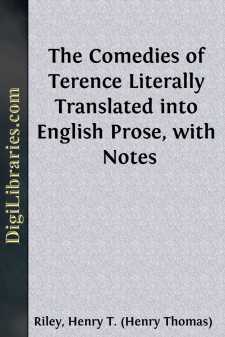 Pamphilus seduces Glycerium, wrongfully supposed to be a sister of a Courtesan, an Andrian by birth; and she having become pregnant, he gives his word that she shall be his wife; but his father has engaged for him another, the daughter of Chremes; and when he discovers the intrigue he pretends that the nuptials are about to take place, desiring to learn what intentions his son may have. By the advice of Davus, Pamphilus does not resist; but Chremes, as soon as he has seen the little child born of Glycerium, breaks off the match, and declines him for a son-in-law. Afterward, this Glycerium, unexpectedly discovered to be his own daughter, he bestows as a wife on Pamphilus, the other on Charinus.

The poet, when first he applied his mind to writing, thought that the only duty which devolved on him was, that the Plays he should compose might please the public. But he perceives that it has fallen out entirely otherwise; for he is wasting his labor in writing Prologues, not for the purpose of relating the plot, but to answer the slanders of a malevolent old Poet. Now I beseech you, give your attention to the thing which they impute as a fault. Menander composed the Andrian and the Perinthian. He who knows either of them well, will know them both; they are in plot not very different, and yet they have been composed in different language and style. What suited, he confesses he has transferred into the Andrian from the Perinthian, and has employed them as his own. These parties censure this proceeding; and on this point they differ from him, that Plays ought not to be mixed up together. By being thus knowing, do they not show that they know nothing at all? For while they are censuring him, they are censuring Nævius, Plautus, and Ennius, whom our Poet has for his precedents; whose carelessness he prefers to emulate, rather than the mystifying carefulness of those parties. Therefore, I advise them to be quiet in future, and to cease to slander; that they may not be made acquainted with their own misdeeds. Be well disposed, then; attend with unbiased mind, and consider the matter, that you may determine what hope is left; whether the Plays which he shall in future compose anew, are to be witnessed, or are rather to be driven off the stage.

ACT THE FIRST. Scene I.

Simo (to the Servants.) Do you carry those things away in-doors; begone. (Beckoning to Sosia.) Sosia, just step here; I want a few words with you.

Sosia. Consider it as said; that these things are to be taken care of, I suppose.

Sim. No, it’s another matter.

Sos. What is there that my ability can effect for you more than this?

Sim. There’s no need of that ability in the matter which I have in hand; but of those qualities which I have ever known as existing in you, fidelity and secrecy.

Sos. I await your will.

Sim. Since I purchased you, you know that, from a little child, your servitude with me has always been easy and light....