The Colored Inventor A Record of Fifty Years 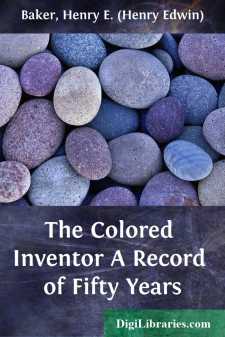 The year 1913 marks the close of the first fifty years since Abraham Lincoln issued that famous edict known as the emancipation proclamation, by which physical freedom was vouchsafed to the slaves and the descendants of slaves in this country. And it would seem entirely fit and proper that those who were either directly or indirectly benefited by that proclamation should pause long enough at this period in their national life to review the past, recount the progress made, and see, if possible, what of the future is disclosed in the past.

That the colored people in the United States have made substantial progress in the general spread of intelligence among them, and in elevating the tone of their moral life; in the acquisition of property; in the development and support of business enterprises, and in the professional activities, is a matter of quite common assent by those who have been at all observant on the subject. This fact is amply shown to be true by the many universities, colleges and schools organized, supported and manned by the race, by their attractive homes and cultured home life, found now in all parts of our country; by the increasing numbers of those of the race who are successfully engaging in professional life, and by the gradual advance the race is making toward business efficiency in many varied lines of business activity.

It is not so apparent, however, to the general public that along the line of inventions also the colored race has made surprising and substantial progress; and that it has followed, even if "afar off," the footsteps of the more favored race. And it is highly important, therefore, that we should make note of what the race has achieved along this line to the end that proper credit may be accorded it as having made some contribution to our national progress.

Standing foremost in the list of things that have actually done most to promote our national progress in all material ways is the item of inventions. Without inventions we should have had no agricultural implements with which to till the fertile fields of our vast continent; no mining machinery for recovering the rich treasure that for centuries lay hidden beneath our surface; no steamcar or steamboat for transporting the products of field and mine; no machinery for converting those products into other forms of commercial needs; no telegraph or telephone for the speedy transmission of messages, no means for discovering and controlling the various utilitarian applications of electricity; no one of those delicate instruments which enable the skilful surgeon of to-day to transform and renew the human body, and often to make life itself stand erect, as it were, in the very presence of death. Without inventions we could have none of those numerous instruments which to-day in the hands of the scientist enable him accurately to forecast the weather, to anticipate and provide against storms on land and at sea, to detect seismic disturbances and warn against the dangers incident to their repetition; and no wireless telegraphy with its manifold blessings to humanity.

All these great achievements have come to us from the hand of the inventor. He it is who has enabled us to inhabit the air above us, to tunnel the earth beneath, explore the mysteries of the sea, and in a thousand ways, unknown to our forefathers, multiply human comforts and minimize human misery. Indeed, it is difficult to recall a single feature of our national progress along material lines that has not been vitalized by the touch of the inventor's genius....