The Colonial Architecture of Philadelphia 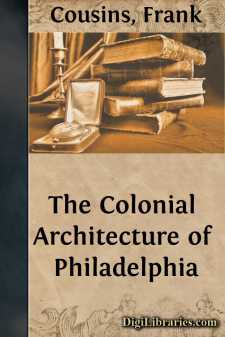 So many books have been published which are devoted wholly or in part to the fine old Colonial residences and public buildings of Philadelphia, including Germantown, that it might seem almost the part of temerity to suppose there could be a place for another one. A survey of the entire list, however, discloses the fact that almost without exception these books are devoted primarily to a picture of the city in Colonial times, to the stories of its old houses and other buildings now remaining, or to an account of the activities of those who peopled them from one to two centuries ago. Some more or less complete description of the structures mentioned has occasionally been included, to be sure, but almost invariably this has been subordinate to the main theme. The narrative has been woven upon a historical rather than an architectural background, so that these books appeal to the tourist, historian and antiquary rather than to the architect, student and prospective home builder.

Interesting as was the provincial life of this community; absorbing as are the reminiscences attaching to its well-known early buildings; important as vi were the activities of those who made them part and parcel of our national life, the Colonial architecture of this vicinity is in itself a priceless heritage—extensive, meritorious, substantial, distinctive. It is a heritage not only of local but of national interest, deserving detailed description, analysis and comparison in a book which includes historic facts only to lend true local color and impart human interest to the narrative, to indicate the sources of affluence and culture which aided so materially in developing this architecture, and to describe the life and manners of the time which determined its design and arrangement. Such a book the authors have sought to make the present volume, and both Mr. Riley in writing the text and Mr. Cousins in illustrating it have been actuated primarily by architectural rather than historic values, although in most instances worthy of inclusion the two are inseparable.

The original boundaries of Philadelphia remained unchanged for one hundred and seventy-five years after the founding of the city, the adjoining territory, as it became populated, being erected into corporated districts in the following order: Southwark, 1762; Northern Liberties, 1771; Moyamensing, 1812; Spring Garden, 1813; Kensington, 1820; Penn, 1844; Richmond, 1847; West Philadelphia, 1851; and Belmont, 1853....