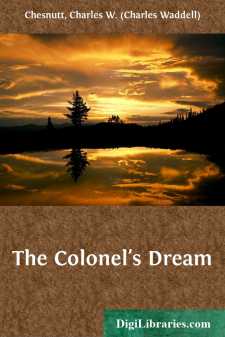 Two gentlemen were seated, one March morning in 189—, in the private office of French and Company, Limited, on lower Broadway. Mr. Kirby, the junior partner—a man of thirty-five, with brown hair and mustache, clean-cut, handsome features, and an alert manner, was smoking cigarettes almost as fast as he could roll them, and at the same time watching the electric clock upon the wall and getting up now and then to stride restlessly back and forth across the room.

Mr. French, the senior partner, who sat opposite Kirby, was an older man—a safe guess would have placed him somewhere in the debatable ground between forty and fifty; of a good height, as could be seen even from the seated figure, the upper part of which was held erect with the unconscious ease which one associates with military training. His closely cropped brown hair had the slightest touch of gray. The spacious forehead, deep-set gray eyes, and firm chin, scarcely concealed by a light beard, marked the thoughtful man of affairs. His face indeed might have seemed austere, but for a sensitive mouth, which suggested a reserve of humour and a capacity for deep feeling. A man of well-balanced character, one would have said, not apt to undertake anything lightly, but sure to go far in whatever he took in hand; quickly responsive to a generous impulse, and capable of a righteous indignation; a good friend, a dangerous enemy; more likely to be misled by the heart than by the head; of the salt of the earth, which gives it savour.

Mr. French sat on one side, Mr. Kirby on the other, of a handsome, broad-topped mahogany desk, equipped with telephones and push buttons, and piled with papers, account books and letter files in orderly array. In marked contrast to his partner's nervousness, Mr. French scarcely moved a muscle, except now and then to take the cigar from his lips and knock the ashes from the end.

Mr. French nodded mechanically. Outside, in the main office, the same air of tense expectancy prevailed. For two weeks the office force had been busily at work, preparing inventories and balance sheets. The firm of French and Company, Limited, manufacturers of crashes and burlaps and kindred stuffs, with extensive mills in Connecticut, and central offices in New York, having for a long time resisted the siren voice of the promoter, had finally faced the alternative of selling out, at a sacrifice, to the recently organised bagging trust, or of meeting a disastrous competition. Expecting to yield in the end, they had fought for position—with brilliant results. Negotiations for a sale, upon terms highly favourable to the firm, had been in progress for several weeks; and the two partners were awaiting, in their private office, the final word. Should the sale be completed, they were richer men than they could have hoped to be after ten years more of business stress and struggle; should it fail, they were heavy losers, for their fight had been expensive. They were in much the same position as the player who had staked the bulk of his fortune on the cast of a die. Not meaning to risk so much, they had been drawn into it; but the game was worth the candle.

He strode over to the window and looked out. It was snowing, and the March wind, blowing straight up Broadway from the bay, swept the white flakes northward in long, feathery swirls....