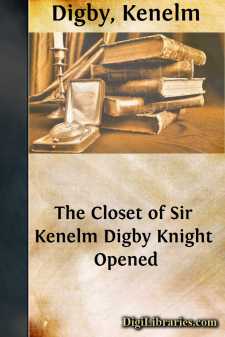 With the waning of Sir Kenelm Digby's philosophic reputation his name has not become obscure. It stands, vaguely perhaps, but permanently, for something versatile and brilliant and romantic. He remains a perpetual type of the hero of romance, the double hero, in the field of action and the realm of the spirit. Had he lived in an earlier age he would now be a mythological personage; and even without the looming exaggeration and glamour of myth he still imposes. The men of to-day seem all of little stature, and less consequence, beside the gigantic creature who made his way with equal address and audacity in courts and councils, laboratories and ladies' bowers.

So when, in a seventeenth-century bookseller's advertisement, I lighted on a reference to the curious compilation of receipts entitled The Closet of Sir Kenelm Digby Opened, having the usual idea of him as a great gentleman, romantic Royalist, and somewhat out-of-date philosopher, I was enough astonished at seeing his name attached to what seemed to me, in my ignorance, outside even his wide fields of interest, to hunt for the book without delay, examine its contents, and inquire as to its authenticity. Of course I found it was not unknown. Though the Dictionary of National Biography omits any reference to it, and its name does not occur in Mr. Carew Hazlitt's Old Cookery Books, Dr. Murray quotes it in his great Dictionary, and it is mentioned and discussed in The Life of Digby by One of his Descendants. But Mr. Longueville treats it therein with too scant deference. One of a large and interesting series of contemporary books of the kind, its own individual interest is not small; and I commend it with confidence to students of seventeenth-century domestic manners. To apologise for it, to treat it as if it were some freak, some unowned sin of Digby's, would be the greatest mistake. On the contrary, its connection with his life and career is of the closest; and I make bold to assert that of all his works, with the doubtful exception of his Memoirs, it is the one best worth reprinting. It is in no spirit of irony that I say of him who in his own day was looked on almost as Bacon's equal, who was the friend of Bacon, Galileo, Descartes, Harvey, Ben Jonson, Cromwell, and all the great spirits of his time, the intimate of kings, and the special friend of queens, that his memory should be revived for his skill in making drinks, and his interest in his own and other folks' kitchens. If to the magnificent and protean Sir Kenelm must now be added still another side, if he must appear not only as gorgeous Cavalier, inmate of courts, controversialist, man of science, occultist, privateer, conspirator, lover and wit, but asbon viveur too, he is not the ordinary bon viveur, who feasts at banquets prepared by far away and unconsidered menials. His interest in cookery—say, rather, his passion for it—was in truth an integral part of his philosophy, and quite as serious as his laboratory practice at Gresham College and Paris. But to prove what may seem an outrageous exaggeration, we must first run over the varied story of his career; and then The Closet Opened will be seen to fall into its due and important place.

Kenelm Digby owed a good deal to circumstances, but he owed most of all to his own rich nature. His family was ancient and honourable. Tiltons originally, they took their later name in Henry III's time, on the acquisition of some property in Lincolnshire, though in Warwickshire and Rutland most of them were settled. Three Lancastrian Digby brothers fell at Towton, seven on Bosworth Field. To his grandfather, Sir Everard the philosopher, he was mentally very much akin, much more so than to his father, another of the many Sir Everards, and the most notorious one. Save for his handsome person and the memory of a fervent devotion to the Catholic faith, which was to work strongly in him after he came to mature years, he owed little or nothing to that most unhappy young man, surely the foolishest youth who ever blundered out of the ways of private virtue into conspiracy and crime. Kenelm, his elder son, born July 11, 1603, was barely three years old when his father, the most guileless and the most obstinate of the Gunpowder Plotters, died on the scaffold....