The Citizen-Soldier or, Memoirs of a Volunteer 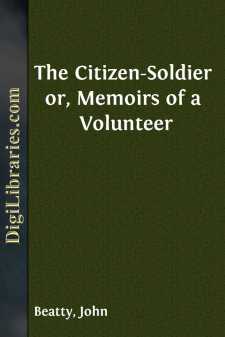 In the lifetime of all who arrive at mature age, there comes a period when a strong desire is felt to know more of the past, especially to know more of those from whom we claim descent. Many find even their chief pleasure in searching among parish records and local histories for some knowledge of ancestors, who for a hundred or five hundred years have been sleeping in the grave. Long pilgrimages are made to the Old World for this purpose, and when the traveler discovers in the crowded church-yard a moss-covered, crumbling stone, which bears the name he seeks, he takes infinite pains to decipher the half-obliterated epitaph, and finds in this often what he regards as ample remuneration for all his trouble. How vastly greater would be his satisfaction if he could obtain even the simplest and briefest history of those in whom he takes so deep an interest. Who were they? How were their days spent, and amongst what surroundings? What were their thoughts, fears, hopes, acts? Who were their associates, and on which side of the great questions of the day did they stand? A full or even partial answer to these queries would possess for him an incalculable value.

So, sitting here to-night, in my little library, with wife and children near, and by God's great kindness all in life and health, I look forward one, two, five hundred years, and see in each succeeding century, and possibly in each generation, so long as the name shall last, a wonder-eyed boy, curious youth, or inquisitive old man, exploring closets and libraries for things of the old time, stumbling finally on this volume, which has, by the charity of the State Librarian, still been preserved; he discovers, with quickening pulse, that it bears his own name, and that it was written for him by one whose body has for centuries been dust. Dull and uninteresting as it may be to others, for him it will possess an inexpressible charm. It is his own blood speaking to him from the shadowy and almost forgotten past. The message may be poorly written, the matter in the main may be worthless, and the greater events recorded may be dwarfed by more recent and important ones, but the volume is nevertheless of absorbing interest to him, for by it he is enabled to look into the face and heart of one of his own kin, who lived when the Nation was young. In leaving this unpretentious record, therefore, I seek to do simply what I would have had my fathers do for me.

Kinsmen of the coming centuries, I bid you hail and godspeed!

The Third Ohio Volunteer Infantry served under two separate terms of enlistment—the one for three months, and the other for three years.

The regiment was organized April 21, 1861, and on April 27th it was mustered into the United States service, with the following field officers: Isaac H. Marrow, Colonel; John Beatty, Lieutenant Colonel, and J. Warren Keifer, Major.

The writer's record begins with the day on which his regiment entered Virginia, June 22, 1861, and ends on January 1, 1864. He does not undertake to present a history of the organizations with which he was connected, nor does he attempt to describe the operations of armies. His record consists merely of matters which came under his own observation, and of camp gossip, rumors, trifling incidents, idle speculations, and the numberless items, small and great, which, in one way and another, enter into and affect the life of a soldier. In short, he has sought simply to gather up the scraps which fell in his way, leaving to other and more competent hands the weightier matters of the great civil war.

Many errors of opinion and of fact he might now correct, and many items which appear unworthy of a paragraph he might now strike out, but he prefers to leave the record as it was written, when cyclopedias could not be consulted, nor time taken for thorough investigation.

Who can really know what an army is unless he mingles with the individuals who compose it, and learns how they live, think, talk, and act?

THE CITIZEN SOLDIER; OR, MEMOIRS OF A VOLUNTEER. JUNE, 1861.

22. Arrived at Bellaire at 3 p. m. There is trouble in the neighborhood of Grafton. Have been ordered to that place.

The Third is now on the Virginia side, and will in a few minutes take the cars....