The Circassian Slave, or, the Sultan's favorite : a story of Constantinople and the Caucasus 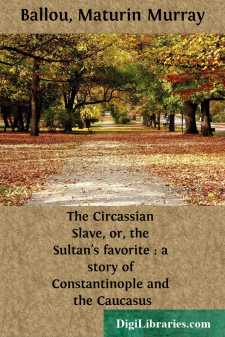 CHAPTER I. THE SLAVE MARKET.

Upon one of those hot, sultry summer afternoons that so often prevail about the banks of the Bosphorus, the sun was fast sinking towards its western course, and gilding as it went, the golden crescents of a thousand minarets, now dancing with fairy feet over the rippling waters of Marmora, now dallying with the spray of the oarsmen's blades, as they pulled the gilded caique of some rich old Mussulman up the tide of the Golden Horn. The soft and dainty scented air came in light zephyrs off the shore of Asia to play upon the European coast, and altogether it was a dreamy, siesta-like hour hat reigned in the Turkish capital.

Let the reader come with us at this time into the circular area that forms the slave market of Constantinople. The bazaar is well filled; here are Egyptians, Bulgarians, Persians, and even Africans; but we will pass them by and cross to the main stand, where are exposed for sale some score of Georgians and Circassians. They are all chosen for their beauty of person, and present a scene of more than usual interest, awaiting the fate that the future may send them in a kind or heartless master; and knowing how much of their future peace depends upon this chance, they watch each new comer with almost painful interest as he moves about the area.

A careless crowd thronged the place, lounging about in little knots here and there, while one lot of slave merchants, with their broad but graceful turbans, were sitting round a brass vessel of coals, smoking or making their coffee, and discussing the matters pertaining to their trade. Some came there solely to smoke their opium-drugged pipes, and some to purchase, if a good bargain should offer and a beauty be sold cheap. Here were sprightly Greeks, sage Jews, and moody Armenians, but all outnumbered by the sedate old Turks, with beards sweeping their very breasts. It was a motley crowd that thronged the slave market.

Now and then there burst forth the ringing sound of laughter front an enclosed division of the place where were confined a whole bevy of Nubian damsels, flat-nostriled and curly-headed, but as slight and fine-limbed as blocks of polished ebony. They were lying negligently about, in postures that would have taken a painter's eye, but we have naught to do with then at this time.

The females that were now offered for sale were principally of the fair and rosy-cheeked Circassian race, exposed to the curious eve of the throng only so far as delicacy would sanction, yet leaving enough visible to develope charms that fired the spirits of the Turkish crowd; and the bids ran high on this sale of humanity, until at last a beautiful creature, with a form of ravishing loveliness, large and lustrous eyes, and every belonging that might go to make up a Venus, was led forth to the auctioneer's stand. She was young and surpassingly handsome, while her hearing evinced a degree of modesty that challenged their highest admiration.

Of course the bidding was spirited and liberal for such a specimen of her race; but suddenly the auctioneer paused, and declared that he had forgotten to mention one matter which might, perhaps, be to some purchasers even a favorable consideration, which was, that the slave was deaf and dumb!...