The Church, the Schools and Evolution 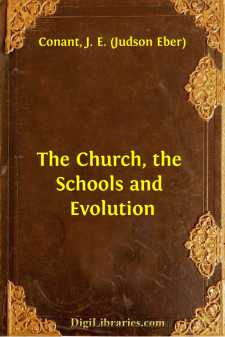 The following pages have grown out of a paper, following the same outline more briefly, which was read before the Pastors’ Conference of the San Juaquin Valley Baptist Association, the largest association in the Northern California Baptist Convention. At the close of the reading a request for its publication was enthusiastically and unanimously voted.

The author has since divided the paper into two chapters; in the first chapter has added to and classified the quotations concerning evolution, has enlarged the remarks on the influence of evolution on Scripture doctrine, and has both enlarged upon and entirely rearranged the matter of the second chapter, in an attempt to make it both more obvious and more conclusive to the reader than it was felt to be to the hearers.

The term “Church” in the following pages is intended to cover that fellowship, of every name, which includes all who have been really born again. When organized church fellowship is referred to, the whole evangelical Protestant fellowship in general is meant, as distinguished from Roman Catholic, Greek church, or any other non-evangelical faith, although true Christians are to be found within every fellowship. The term “Schools,” in its larger meaning, includes all institutions of learning maintained at private, denominational, or public expense; more specifically, [p 4] those dominated by the present evolutionary philosophy are meant. With notable exceptions in a few schools that refuse to be so dominated, the whole educational system in general, especially in the Northern States, has practically capitulated to the evolutionists, and the schools that have so surrendered are particularly in mind in the following discussion.

It is but a humble effort to point out what is obviously the only possible solution for the present distressing and destructive controversy between the Church and the Schools, but the author fondly hopes that it will prove to be a real, even though small, contribution toward the ending of that controversy.

It is sent out with the prayer that He who is Truth incarnate may lead those in both the Church and the Schools who really want to know the truth at all cost to a common attitude toward Himself, to a common, because truly scientific, method of investigating truth in both the natural and the spiritual realms, and therefore to a common goal which will unite them against all those forces that seek to capture both the Church and the Schools for the enemy.

. The Theory of Evolution is Unproven

. The Testimony for Evolution

. The Testimony Against Evolution

. In the Geological Realm

. The Whole Theory in General

. The Logic of Evolution is Destructive

. Evolution and the Fall of Man