The Chronology of Ancient Kingdoms Amended To which is Prefix'd, A Short Chronicle from the First Memory of Things in Europe, to the Conquest of Persia by Alexander the Great 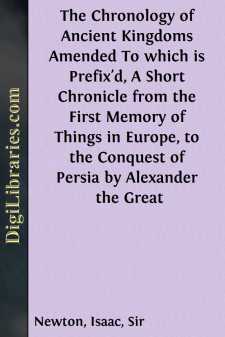 CHAP. I. Of the Chronology of the First Ages of the Greeks.

All Nations, before they began to keep exact accounts of Time, have been prone to raise their Antiquities; and this humour has been promoted, by the Contentions between Nations about their Originals. Herodotus tells us, that the Priests of Egypt reckoned from the Reign of Menes to that of Sethon, who put Sennacherib to flight, three hundred forty and one Generations of men, and as many Priests of Vulcan, and as many Kings of Egypt: and that three hundred Generations make ten thousand years; for, saith he, three Generations of men make an hundred years: and the remaining forty and one Generations make 1340 years: and so the whole time from the Reign of Menes to that of Sethon was 11340 years. And by this way of reckoning, and allotting longer Reigns to the Gods of Egypt than to the Kings which followed them, Herodotus tells us from the Priests of Egypt, that from Pan to Amosis were 15000 years, and from Hercules to Amosis 17000 years. So also the Chaldæans boasted of their Antiquity; for Callisthenes, the Disciple of Aristotle, sent Astronomical Observations from Babylon to Greece, said to be of 1903 years standing before the times of Alexander the great. And the Chaldæans boasted further, that they had observed the Stars 473000 years; and there were others who made the Kingdoms of Assyria, Media and Damascus, much older than the truth.

Some of the Greeks called the times before the Reign of Ogyges, Unknown, because they had No History of them; those between his flood and the beginning of the Olympiads, Fabulous, because their History was much mixed with Poetical Fables: and those after the beginning of the Olympiads, Historical, because their History was free from such Fables. The fabulous Ages wanted a good Chronology, and so also did the Historical, for the first 60 or 70 Olympiads.

The Europeans, had no Chronology before the times of the Persian Empire: and whatsoever Chronology they now have of ancienter times, hath been framed since, by reasoning and conjecture. In the beginning of that Monarchy, Acusilaus made Phoroneus as old as Ogyges and his flood, and that flood 1020 years older than the first Olympiad; which is above 680 years older than the truth: and to make out this reckoning his followers have encreased the Reigns of Kings in length and number. Plutarch tells us that the Philosophers anciently delivered their Opinions in Verse, as Orpheus, Hesiod, Parmenides, Xenophanes, Empedocles, Thales; but afterwards left off the use of Verses; and that Aristarchus, Timocharis, Aristillus, Hipparchus, did not make Astronomy the more contemptible by describing it in Prose; after Eudoxus, Hesiod, and Thales had wrote of it in Verse. Solon wrote in Verse, and all the Seven Wise Men were addicted to Poetry, as Anaximenes affirmed. 'Till those days the Greeks wrote only in Verse, and while they did so there could be no Chronology, nor any other History, than such as was mixed with poetical fancies....