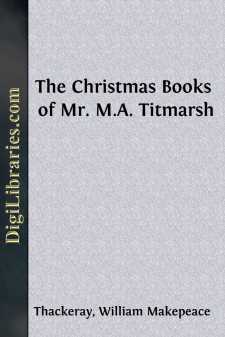 I do not know where Ballymulligan is, and never knew anybody who did. Once I asked the Mulligan the question, when that chieftain assumed a look of dignity so ferocious, and spoke of "Saxon curiawsitee" in a tone of such evident displeasure, that, as after all it can matter very little to me whereabouts lies the Celtic principality in question, I have never pressed the inquiry any farther.

I don't know even the Mulligan's town residence. One night, as he bade us adieu in Oxford Street,—"I live THERE," says he, pointing down towards Oxbridge, with the big stick he carries—so his abode is in that direction at any rate. He has his letters addressed to several of his friends' houses, and his parcels, &c. are left for him at various taverns which he frequents. That pair of checked trousers, in which you see him attired, he did me the favor of ordering from my own tailor, who is quite as anxious as anybody to know the address of the wearer. In like manner my hatter asked me, "Oo was the Hirish gent as 'ad ordered four 'ats and a sable boar to be sent to my lodgings?" As I did not know (however I might guess) the articles have never been sent, and the Mulligan has withdrawn his custom from the "infernal four-and-nine-penny scoundthrel," as he calls him. The hatter has not shut up shop in consequence.

I became acquainted with the Mulligan through a distinguished countryman of his, who, strange to say, did not know the chieftain himself. But dining with my friend Fred Clancy, of the Irish bar, at Greenwich, the Mulligan came up, "inthrojuiced" himself to Clancy as he said, claimed relationship with him on the side of Brian Boroo, and drawing his chair to our table, quickly became intimate with us. He took a great liking to me, was good enough to find out my address and pay me a visit: since which period often and often on coming to breakfast in the morning I have found him in my sitting-room on the sofa engaged with the rolls and morning papers: and many a time, on returning home at night for an evening's quiet reading, I have discovered this honest fellow in the arm-chair before the fire, perfuming the apartment with my cigars and trying the quality of such liquors as might be found on the sideboard. The way in which he pokes fun at Betsy, the maid of the lodgings, is prodigious. She begins to laugh whenever he comes; if he calls her a duck, a divvle, a darlin', it is all one. He is just as much a master of the premises as the individual who rents them at fifteen shillings a week; and as for handkerchiefs, shirt-collars, and the like articles of fugitive haberdashery, the loss since I have known him is unaccountable. I suspect he is like the cat in some houses: for, suppose the whiskey, the cigars, the sugar, the tea-caddy, the pickles, and other groceries disappear, all is laid upon that edax-rerum of a Mulligan.

The greatest offence that can be offered to him is to call him MR. Mulligan. "Would you deprive me, sir," says he, "of the title which was bawrun be me princelee ancestors in a hundred thousand battles? In our own green valleys and fawrests, in the American savannahs, in the sierras of Speen and the flats of Flandthers, the Saxon has quailed before me war-cry of MULLIGAN ABOO! MR. Mulligan! I'll pitch anybody out of the window who calls me MR. Mulligan." He said this, and uttered the slogan of the Mulligans with a shriek so terrific, that my uncle (the Rev....