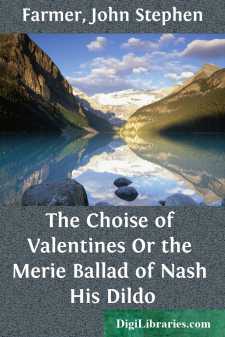 Nash's "CHOISE OF VALENTINES" has apparently come down to us only in manuscript form. It is extremely doubtful (Oldys notwithstanding), whether the poem was ever before accorded the dignity of print. Nor would it now be deemed worthy of such were the only considerations those of literary merit or intrinsic value: truth to tell there is little of either to recommend it. But, as it has been repeatedly said, and well insisted on, the world cannot afford to lose any "document" whatsoever which bears, or may bear, in the slightest degree, on the story of its own growth and development, and out of which its true life has to be written. Especially is even the meanest Elizabethan of importance and value in relation to the re-construction—still far from complete—of the life and times of the immortal bard of Avon. In the most unlikely quarters a quarry may yet be found from which the social historian may obtain a valuable sidelight on manners and customs, the philologist a new lection or gloss, or the antiquary a solution to some, as yet, unsolved problem.

"The Choise of Valentines" claims attention, and is of value principally on two grounds, either of which, it is held, should amply justify the more permanent preservation[page viii] now accorded this otherwise insignificant production. In the first place, it appears to have been dedicated to the Earl of Southampton, the generous patron of letters, and friend of Shakspeare; and second, it is probably the only example extant of the kind of hackwork to which Nash was frequently reduced by "the keenest pangs of poverty." He confesses he was often obliged "to pen unedifying toys for gentlemen." When Harvey denounced him for "emulating Aretino's licentiousness" he admitted that poverty had occasionally forced him to prostitute his pen "in hope of gain" by penning "amorous Villanellos and Quipasses for new-fangled galiards and newer Fantisticos." In fact, he seems rarely to have known what it was to be otherwise than the subject of distress and need. As an example of these "unedifying toys" the present poem may, without much doubt, be cited, and an instance in penning which his "hope of gain" was realised.

It is a matter of history that Nash sought, and succeeded in obtaining for a time, the patronage of the Earl of Southampton, one of the most liberal men of his day, and a prominent figure in the declining years of Elizabeth. "I once tasted," Nash writes in 1593, "the full spring of the Earl's liberality." Record is also made of a visit paid by him to Lord Southampton and Sir George Carey, while the former was Governor, and the latter Captain-General, of the Isle of Wight.

From internal evidence it would seem that this poem was called forth by the Earl's bounty to its author. "My[page ix] muse devorst from deeper (the Rawl. MS. reads deepest) care, presents thee with a wanton elegie;" and further on, the dedication promises "better lines" which should "ere long" be penned in "honour" of his noble patron....