The Children's Longfellow Told in Prose 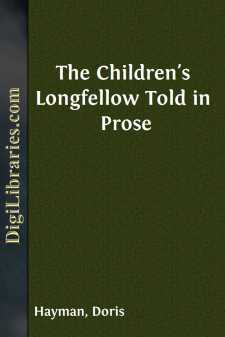 he home of the American poet, Henry Wadsworth Longfellow, during the greater part of his life was in the picturesque town of Cambridge, Massachusetts, and there many of his best known poems were written.

The forge of the Village Blacksmith really stood there beneath the shelter of a "spreading chestnut tree," in Cambridge, and when, as the town grew larger, the smithy was removed and the tree cut down, all the school children in Cambridge subscribed together to buy the wood of the famous tree and had a chair made from it which they gave to the poet.

Longfellow was deeply interested in all Indian lore, and in the poem of Hiawatha he has embodied many of the old legends of the North American Indians. Hiawatha, who was known among the different tribes under various names, was supposed to be a person of miraculous birth, sent among them by the Great Spirit to clear their rivers and forests and to teach them the arts of peace.

In the Golden Legend we find quite a different form of story. This is a legend written down by one of the old German Minnesinger and called, "Der arme Heinrich" (Unhappy Henry). The American poet has faithfully followed the outlines of the story, but has added a good deal to it, including the appearance of Lucifer with his train of evil spirits, and his attempts to lead Prince Henry astray.

Five of the remaining stories are taken from the "Tales of a Wayside Inn"—a series of poems whose plan was evidently suggested by the Canterbury Tales.

t was in bygone days, long before the use of steam was even thought about; trains were unknown, and when people wished to get from one part of the country to another they were obliged to make the journey on horseback or in coaches, and distances, which nowadays we can cover in a few hours, used to take our ancestors several days. It was the same thing in regard to journeys by sea. To cross the Atlantic, for instance, by an old-fashioned sailing vessel was a far more venturesome undertaking than it is to step aboard one of the great ocean liners and be conveyed swiftly and safely to one's destination. A sailing ship ran far greater risks of being wrecked by storms, and, if the winds were unfavorable, she would toss about for weeks, perhaps even for months, instead of being able to make straight for her port. And yet there was a charm about a sailing ship which no steamer with all its complicated machinery can replace, and in the good old days we hear of men who have weathered storms as violent and sailed on voyages quite as perilous as any which have been undertaken since.

Well, it happened in the times of which we are speaking, that a wealthy merchant in the New Country came to a great ship-builder, who was known to all by the name of the Master, and bade him build a strong and goodly ship.

"It must be beautiful to behold," said the merchant, "and yet strong enough to wrestle with wind and storm."

The Master was delighted to receive this commission, for his heart was in his work and he felt that here was a chance to build a ship worthy of his reputation, so he answered joyfully: "Before long we will launch as goodly and strong a vessel as ever weathered a wintry gale."

At these words the merchant departed content, because he knew that whatever the Master promised he would surely fulfill.

The Master made no delay but set to work at once on a little model of the ship, making it perfect in every part, so that when the great ship came to be built he would have every detail already clear before him. As he labored, his mind was busy recalling all the famous ships which had been built before this one. A picture of one of the most renowned, the Great Harry, was hanging on the wall before him. It was a strange sight, with its cumbersome form, its bow and stern raised high and its eight round towers like those of some old castle. The Master smiled as he looked on it and murmured to himself: "Our ship shall be of another form to this." And when the model was finished, it was indeed of a very different build....