The Children's Book of Stars 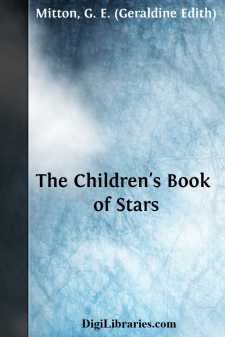 CHAPTER I THE EARTH

It is a curious fact that when we are used to things, we often do not notice them, and things which we do every day cease to attract our attention. We find an instance of this in the curious change that comes over objects the further they are removed from us. They grow smaller and smaller, so that at a distance a grown-up person looks no larger than a doll; and a short stick planted in the ground only a few feet away appears as long as a much longer one at ten times the distance. This process is going on all round us every minute: houses, trees, buildings, animals, all seem larger or smaller in proportion to their distance from us. Sometimes I have seen a row of raindrops hanging on a bar by the window. When the sun catches one of them, it shines so brilliantly that it is as dazzling as a star; but my sense tells me it is a raindrop, and not a star at all. It is only because it is so near it seems as bright and important as a mighty star very, very far away.

We are so much accustomed to this fact that we get into a habit of judging the distance of things by their size. If we see two lights shining on a dark night, and one is much larger than the other, we think that the bright one must be nearer to us; yet it need not necessarily be so, for the two lights might possibly be at the same distance from us, and one be large and the other small. There is no way in which we can tell the truth by just looking at them. Now, if we go out on any fine moonlight night and look up at the sky, we shall see one object there apparently much larger than any other, and that is the moon, so the question that occurs to us at once is, Is the moon really very much larger than any of the stars, or does it only seem so because it is very much nearer to us? As a matter of fact, the moon is one of the smallest objects in view, only, as it is our nearest neighbour, it appears very conspicuous. Having learned this, we shall probably look about to see what else there is to attract attention, and we may notice one star shining very brilliantly, almost like a little lamp, rather low down in the sky, in that part of it where the sun has lately set. It is so beautifully bright that it makes all the others look insignificant in comparison, yet it is not really large compared with the others, only, as it comes nearer to us than anything else in the sky except the moon, it looks larger than it has any right to do in comparison with the others.

After this we might jump to the conclusion that all the bright large stars are really small and near to us, and all the faintly shining ones large and far away. But that would not be true at all, for some bright ones are very far away and some faint ones comparatively near, so that all we can do is to learn about them from the people who have studied them and found out about them, and then we shall know of our own knowledge which of them seem bright only because they are nearer than the others, and which are really very, very brilliant, and so still shine brightly, though set in space at an almost infinite distance from us.

The sun, as we all know, appears to cross the sky every day; he gets up in the east and drops down in the west, and the moon does the same, only the moon is unlike the sun in this, that it changes its shape continually. We see a crescent moon growing every night larger and larger, until it becomes full and fat and round, and then it grows thinner and thinner, until it dies away; and after a little while it begins again, and goes through all the same changes once more. I will tell you why this is so further on, when we have a chapter all about the moon.

If you watch the stars quietly for at least five minutes, you will see that they too are moving steadily on in the same way as the sun and moon....