The Children's Book of Celebrated Pictures 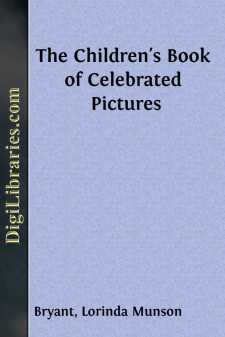 n looking at pictures of the old masters you will often see one called the "Holy Family." I want you to know who belonged to the Holy Family. The grown people are Joseph and Mary, the father and mother of Jesus; they had no last names at that time. The children are Jesus and his cousin, John the Baptist, six months older than Jesus. Sometimes the little John's mother, Elizabeth, is in the picture and sometimes his father, Zacharias, is there also.

One story from a very old book, "The Infancy," tells about Jesus playing with the other boys. It says:

"And when Jesus was seven years of age, he was on a certain day with other boys, his companions about the same age. Who when they were at play, made clay into several shapes, namely, asses, oxen, birds, and other figures, each boasting of his work, endeavoring to exceed the rest.

n old man, eighty-four years of age, lived in this house on "The Valley Farm," in England. He was born here and he used to say that he had never been away from this house but four days in all his life. He asked Constable to come and paint a picture of his home. And what a beautiful picture it is! The old house, snuggled down so close to the little stream, could paddle its feet—if it had any—in the cool water. And see how tenderly the tall trees keep guard over it. How we wish that we could be there too! If only we could be in the punt—I am sure it is a punt-boat even if one end of it is pointed—and be rowed up and down in the delightful shade. Those two in the boat have no doubt been for the cows and are driving them home to be milked.

John Constable liked to choose his subjects for his pictures from the familiar scenes near his home. He used to say to his friends:

"I have always succeeded best with my native scenes. They have always charmed me, and I hope they always will."