The Children of Wilton Chase 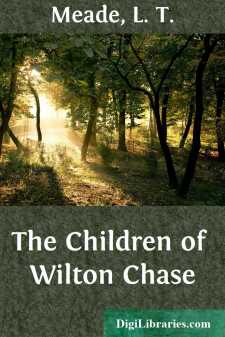 "What are you saying, Ermie?"

Ermengarde was standing by the dressing-table in her room. She had been talking half to herself; she now turned quickly round, and confronted a plain little girl of between eleven and twelve.

"Is that you, Marjorie? I didn't know you were listening. I had not an idea you were in the room."

"But what did you say, Ermie? Who is the person you won't obey?"

Marjorie had puckered up her brows. Her small, shrewd, sensible face looked full of anxiety.

"Now, look here," said Ermengarde, speaking with passion, "don't you interfere! You are always poking your finger into everyone's pie. Leave mine alone. I don't want you to meddle, nor to help me. I understand my own affairs. What is the matter? Are you going to cry?"

Marjorie walked to the other end of the large bedroom, tied on a shabby brown hat, and prepared to leave the room. When she reached the door she turned again, and looked at her sister.

"When Basil comes home——" she began.

"Oh, don't. Why do you talk about Basil?" Ermengarde tossed her hat off her head as she spoke. "And just when I might have been happy! What are you lingering by the door for, Marjorie? Well, if you must know, I am not going to obey Miss Nelson any more. She went a little too far this morning, and I'll show her that I'm Miss Wilton, and that she's only the governess—and—and——Now, where's that child gone to? I do think Marjorie is a perfect nuisance. I don't see anything good in her. Paul Pry, I call her. Paul Pry, and a little busy-body. I suppose she'll go and make up to Miss Nelson now, and tell her what I've said. No, though, that isn't like her. She does try to stick up for one. Poor little plain mite. Well, I don't intend to obey Miss Nelson, Marjorie or no Marjorie. Basil is coming home from school, and I shall go in the carriage to meet him. I don't care what Miss Nelson said. She's not going to keep me from meeting my own Basil. Why, I was fourteen a month ago—a great many girls are grown up at fourteen. I don't mean English girls, of course, but foreigners, and I'm not going to be kept in surveillance, just as if I was an infant."

Ermengarde was quite alone in her nice room. The house was still, for just now the children—there were a good many children at Wilton Chase—were out. The time was the end of July, and on this very day Basil and Eric, the two public-school boys, were coming home. The whole house, that is the nursery and schoolroom part of the house, were in a flutter of expectation and excitement. Nothing ever disturbed the other end of Wilton Chase, where father and Aunt Elizabeth, and the numerous visitors resided. But the nurseries and the schoolrooms were generally noisy apartments, and it was very unusual to have such a stillness as now reigned over the whole of this important portion of the house.

Ermengarde and Marjorie slept in two pretty white beds, side by side, in this nice, large, cheerful bedroom....