The Child of Pleasure 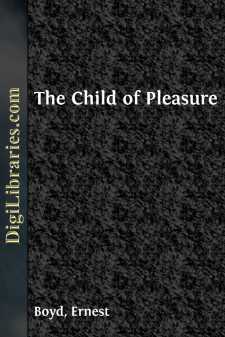 It is characteristic of the atmosphere of legend in which Gabriele d'Annunzio has lived that even the authenticity of his name has been disputed. It was said that his real name was Gaetano Rapagnetta, and the curious will find amongst the Letters of James Huneker the boast that he was the first person to reveal to America the fact that d'Annunzio's name was "Rapagnetto"—a purely personal contribution to the legend. Yet, the plain fact, as proven by his birth certificate, is that the author of "The Child of Pleasure" was born at Pescara, on the 12th of March, 1863, the son of Francesco Paolo d'Annunzio and Luisa de Benedictis. Il Piacere, to give this novel its Italian name, was published when d'Annunzio was only twenty-six years of age, and except for an unimportant and imitative volume of short stories, it was his first sustained prose work. It is the book which at once made the novelist famous in his own country and very soon afterwards in England and France, where it was the first of his works to be translated. In America d'Annunzio was already known as the author of a powerful realistic novelette, "Episcopo & Co.," which was published in Chicago in 1896, two years before "The Child of Pleasure" appeared in London. As has so often happened since, America led the way in introducing into the English language a writer who is one of the foremost figures in Continental European literature.

In order to realize the sensation which Gabriele d'Annunzio created, it is necessary to glance back at the opinions of some of his early champions in foreign countries. Ouida claims, I think rightly, that her article in the Fortnightly Review, which was reprinted in her "Critical Studies," was the first account in English of the author and his work. In the main, although besprinkled with moral asides, it is, with one exception, as good an essay as any that has since been written on the subject. Ouida was sure that the wickedness of d'Annunzio was such that the only work of his which will become known to the English public in general will be the Vergini delle Rocce, because "(as far as it has gone) it is not indecent. The other works could not be reproduced in English." In proof of her contentions Ouida disclosed the fact that the French versions of the trilogy, "The Child of Pleasure," "The Victim," and "The Triumph of Death," were bowdlerized. At the same time she obligingly referred her readers to some of the choicer passages in the original, such as Chapter X of "The Child of Pleasure," where she claimed that "ingenuities of indecency" had been gratuitously introduced. For the guidance of those interested in such matters I may explain that, by a coincidence, the "ingenuity" in question is almost identical with that which was cited in the earlier part of La Garçonne as proof that Victor Margueritte was unworthy of the Legion of Honor.

After Ouida in England came the venerable Vicomte Melchior de Vogüé in France, who is best known to readers in this country for his standard tome on the Russian novel. In the austere pages of the Revue des Deux Mondes he carefully explained to his readers that d'Annunzio's lewdness must not be confused with the obscenities of Zola, whereat Ouida protested that they were alike in their complacent preoccupation with mere filth. The Frenchman is the sounder critic, it must be said, for while d'Annunzio frequently parallels some of the most unclean—in the literal, not the moral sense—scenes and incidents in Zola, his attitude about sex is as unlike Zola's as that of the late W. D. Howells. Only in "Nana" did Zola describe the life and emotions of a woman whose whole life is given up to love, and then, as we know, he chose a singularly crude and professional person, using her career as a symbol of the Second Empire. D'Annunzio has never described women with any other reason for existence but love, yet none of his heroines has poor Nana's uninspiring motives. They are amateurs with a skill undreamed of in Nana's philosophy; they believe in love for art's sake. Consequently, the French critic was right in insisting that Zola and d'Annunzio are two very different persons, although confounded in an identical obloquy by the moralists. He is, however, not quite so subtle when he tries to argue from this that, in the conventional sense, d'Annunzio is more moral.

At this point I will cite an unexpectedly intelligent witness, one of the early admirers of d'Annunzio in English, and the author of an essay on him which is assuredly the best which has appeared in that language....