The Child at Home The Principles of Filial Duty, Familiarly Illustrated 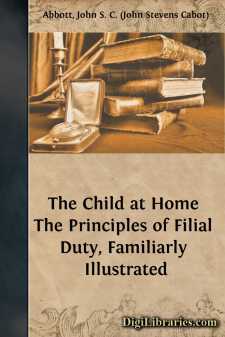 In large cities there are so many persons guilty of crimes, that it is necessary to have a court sit every day to try those who are accused of breaking the laws. This court is called the Police Court. If you should go into the room where it is held, you would see the constables bringing in one after another of miserable and wicked creatures, and, after stating and proving their crimes, the judge would command them to be led away to prison. They would look so wretched that you would be shocked in seeing them.

One morning a poor woman came into the Police Court in Boston. Her eyes were red with weeping, and she seemed to be borne down with sorrow. Behind her followed two men, leading in her daughter.

"Here, sir," said a man to the judge, "is a girl who conducts so badly that her mother cannot live with her, and she must be sent to the House of Correction."

"My good woman," said the judge, "what is it that your daughter does which renders it so uncomfortable to live with her?"

"Oh, sir," she replied, "it is hard for a mother to accuse her own daughter, and to be the means of sending her to the prison. But she conducts so as to destroy all the peace of my life. She has such a temper, that she sometimes threatens to kill me, and does every thing to make my life wretched."

The unhappy woman could say no more. Her heart seemed bursting with grief, and she wept aloud. The heart of the judge was moved with pity, and the bystanders could hardly refrain from weeping with this afflicted mother. But there stood the hard-hearted girl, unmoved. She looked upon the sorrows of her parent in sullen silence. She was so hardened in sin, that she seemed perfectly insensible to pity or affection. And yet she was miserable. Her countenance showed that passion and malignity filled her heart, and that the fear of the prison, to which she knew she must go, filled her with rage.

The judge turned from the afflicted mother, whose sobs filled the room, and, asking a few questions of the witnesses, who testified to the daughter's ingratitude and cruelty, ordered her to be led away to the House of Correction. The officers of justice took her by the arm, and carried her to her gloomy cell. Her lonely and sorrowing mother went weeping home to her abode of penury and desolation. Her own daughter was the viper which had stung her bosom. Her own child was the wretch who was filling her heart with sorrow.

And while I now write, this guilty daughter is occupying the gloomy cell of the prison, and this widowed mother is in her silent dwelling, in loneliness and grief! Oh, could the child who reads these pages, see that mother and that daughter now, you might form some feeble idea of the consequences of disobedience; you might see how unutterable the sorrow a wicked child may bring upon herself and upon her parents. It is not easy, in this case, to judge which is the most unhappy, the mother or the child. The mother is broken-hearted at home. She is alone and friendless....