The Child and the Curriculum 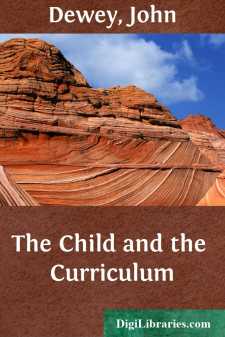 The Child and the Curriculum

Profound differences in theory are never gratuitous or invented. They grow out of conflicting elements in a genuine problem—a problem which is genuine just because the elements, taken as they stand, are conflicting. Any significant problem involves conditions that for the moment contradict each other. Solution comes only by getting away from the meaning of terms that is already fixed upon and coming to see the conditions from another point of view, and hence in a fresh light. But this reconstruction means travail of thought. Easier than thinking with surrender of already formed ideas and detachment from facts already learned is just to stick by what is already said, looking about for something with which to buttress it against attack.

Thus sects arise: schools of opinion. Each selects that set of conditions that appeals to it; and then erects them into a complete and independent truth, instead of treating them as a factor in a problem, needing adjustment.

The fundamental factors in the educative process are an immature, undeveloped being; and certain social aims, meanings, values incarnate in the matured experience of the adult. The educative process is the due interaction of these forces. Such a conception of each in relation to the other as facilitates completest and freest interaction is the essence of educational theory.

But here comes the effort of thought. It is easier to see the conditions in their separateness, to insist upon one at the expense of the other, to make antagonists of them, than to discover a reality to which each belongs. The easy thing is to seize upon something in the nature of the child, or upon something in the developed consciousness of the adult, and insist upon that as the key to the whole problem. When this happens a really serious practical problem—that of interaction—is transformed into an unreal, and hence insoluble, theoretic problem. Instead of seeing the educative steadily and as a whole, we see conflicting terms. We get the case of the child vs. the curriculum; of the individual nature vs. social culture. Below all other divisions in pedagogic opinion lies this opposition.

The child lives in a somewhat narrow world of personal contacts. Things hardly come within his experience unless they touch, intimately and obviously, his own well-being, or that of his family and friends. His world is a world of persons with their personal interests, rather than a realm of facts and laws. Not truth, in the sense of conformity to external fact, but affection and sympathy, is its keynote. As against this, the course of study met in the school presents material stretching back indefinitely in time, and extending outward indefinitely into space. The child is taken out of his familiar physical environment, hardly more than a square mile or so in area, into the wide world—yes, and even to the bounds of the solar system. His little span of personal memory and tradition is overlaid with the long centuries of the history of all peoples....