The Chief End of Man 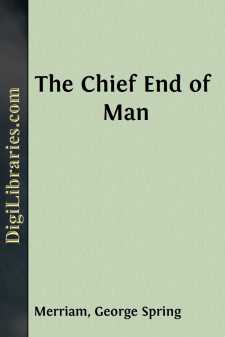 It sometimes happens that a man is confronted by a perplexing crisis, before which he is quite at a loss how to direct his course. His familiar rules and habits seem to fail him, and his perplexity approaches dismay. At such a time, if his previous life has been guided by purpose and consideration, he may perhaps help himself by looking attentively back at the steps by which he has hitherto advanced. He recalls other crises, he sees how they were met, and light, it may be, breaks on the path before him, or at least he takes fresh heart and hope.

Some such crisis confronts the thoughtful mind of the world to-day, in the disappearance of the old sanctions of religion. When the idea of an authoritative revelation of divine truth has been finally dislodged, there are moments when moral chaos seems to impend. We are still upheld by old habits and associations, we are borne along by forces mightier than our creeds or negations, and the loyal spirit catches at moments the "deeper voice across the storm," even though the voice be inarticulate. But it is felt that we need to somehow define anew the rule of life. By what road shall man attain his supreme desire,—how can he be good, and how can he be happy?

As the individual seeks help in looking back over his course, so it may help us if we look back a little over some of the significant passages in the movement of mankind. History is to the race what memory is to the individual. One's best treasure is the memory of his happy and heroic hours. The best treasure of humanity is the story of its happy and heroic souls. Let us call before us some of these, and see how they answered the questions we ask.

Following this clew, we run back along the line of what may be called "our spiritual ancestry." Turning naturally to our own next of kin, a child of New England, going back from the teaching of his youth to his fathers and to their fathers, soon finds before him the Puritan. When we study the Puritan it appears that he was a most composite product, and that just behind him, and essential to the understanding of him, is the great mediaeval church. Studying the church, there is nothing for it but to go back to its foundation, and ponder well the one from whose person and teaching it grew. And to know at all the mind of Jesus we must know something of the mind of Judaism, of which he was the child. Indeed, the popular religion of to-day bases itself directly on the Old and New Testaments; so that our lineage must clearly be traced from this as one of its origins. Another ancient line attracts us, by a history which blends with Judaism at the birth of Christianity, and by a literature which is rich in moral treasures. We must glance at some of the landmarks of the Greek and Roman story.

And here our present study may define its bounds. We will not go back to the progress from the animal up to man, nor survey the prehistoric man; nor will we turn aside to the religions of Egypt, Arabia, and the East; and we can but lightly glance at the early Teutonic people from whom we are descended after the flesh....