The Chautauqua Girls At Home 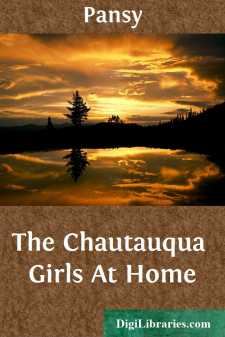 CHAPTER I. TREADING ON NEW GROUND.   HAT last Sabbath of August was a lovely day; it was the first Sabbath that our girls had spent at home since the revelation of Chautauqua. It seemed lovely to them. "The world looks as though it was made over new in the night," Eurie had said, as she threw open her blinds, and drew in whiffs of the sweet, soft air. And the church, whither these girls had so often betaken themselves on summer mornings, just like this one—how could two or three weeks have changed it? They could not feel that it was the same building.

Hitherto it had been to them simply the First Church; grander, by several degrees, than any other church in the city, having the finest choir, and the finest organ, and the most elegant carpets, and making the grandest floral display of all the temples, as became the First Church, of course; but to-day, this glowing, glorious August day, it was something infinitely above and beyond all this; it was the visible temple of the invisible God, their Saviour, and they were going up to worship—aye, really and truly to worship. They, in their different ways, according to their very different natures, felt this and were thrilled with it as their feet trod the aisles. People can feel a great many things, and not show them to the casual observer. Sitting in their respective pews, they looked in no sense different from the way they had looked on a hundred different Sabbaths before this.

Ruth Erskine, in the corner of her father's pew, attired, as she had often been before, in the most delicate and exquisite of summer silks, with exactly the right shade of necktie, gloves and sash, to set off the beauty of the dress, with the soft and delicate laces about her white throat, for which she was especially noted, looked not one whit different from the lady who sat there three weeks before. You wouldn't have known that her heart was singing for joy.

Flossy Shipley, aglow with elegance, as she always was, looked the same airy butterfly that had flitted in and out of that church on many a summer day before; and Marion, in her corner in the gallery, was simply the grave, somewhat weary-looking school-teacher at one of the wards—"a girl with infidel tendencies," that is all the great congregation knew about her; in fact, comparatively few of them knew even that.

Eurie Mitchell was the doctor's eldest daughter, and had in no sense improved as to her toilet—"a thing which could hardly be expected, since she had thrown away so much money on that wild scheme of living in the woods;" that was what some of the congregation thought about her.

Dr. Dennis saw all these girls, and looked gloomy over them; he was in the mood to need sympathetic hearers, to long to be in accord with his audience, and feel that they could sympathize with him in his reach after a higher type of religion. What could these four girls know about a higher type, when they had no religion at all, and had been spending two lawless weeks in looking at the subject, till their hearts were either attuned to ridicule or disgusted, according to their several temperaments?...