The Census in Moscow 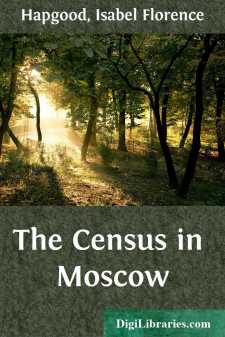 The object of a census is scientific.  A census is a sociological investigation.  And the object of the science of sociology is the happiness of the people.  This science and its methods differ sharply from all other sciences.

Its peculiarity lies in this, that sociological investigations are not conducted by learned men in their cabinets, observatories and laboratories, but by two thousand people from the community.  A second peculiarity is this, that the investigations of other sciences are not conducted on living people, but here living people are the subjects.  A third peculiarity is, that the aim of every other science is simply knowledge, while here it is the good of the people.  One man may investigate a nebula, but for the investigation of Moscow, two thousand persons are necessary.  The object of the study of nebulæ is merely that we may know about nebulæ; the object of the study of inhabitants is that sociological laws may be deduced, and that, on the foundation of these laws, a better life for the people may be established.  It makes no difference to the nebula whether it is studied or not, and it has waited long, and is ready to wait a great while longer; but it is not a matter of indifference to the inhabitants of Moscow, especially to those unfortunates who constitute the most interesting subjects of the science of sociology.

The census-taker enters a night lodging-house; in the basement he finds a man dying of hunger, and he politely inquires his profession, his name, his native place, the character of his occupation, and after a little hesitation as to whether he is to be entered in the list as alive, he writes him in and goes his way.

And thus will the two thousand young men proceed.  This is not as it should be.

Science does its work, and the community, summoned in the persons of these two thousand young men to aid science, must do its work.  A statistician drawing his deductions from figures may feel indifferent towards people, but we census-takers, who see these people and who have no scientific prepossessions, cannot conduct ourselves towards them in an inhuman manner.  Science fulfils its task, and its work is for its objects and in the distant future, both useful and necessary to us.  For men of science, we can calmly say, that in 1882 there were so many beggars, so many prostitutes, and so many uncared-for children.  Science may say this with composure and with pride, because it knows that the confirmation of this fact conduces to the elucidation of the laws of sociology, and that the elucidation of the laws of sociology leads to a better constitution of society.  But what if we, the unscientific people, say: “You are perishing in vice, you are dying of hunger, you are pining away, and killing each other; so do not grieve about this; when you shall have all perished, and hundreds of thousands more like you, then, possibly, science may be able to arrange everything in an excellent manner.”  For men of science, the census has its interest; and for us also, it possesses an interest of a wholly different significance.  The interest and significance of the census for the community lie in this, that it furnishes it with a mirror into which, willy nilly, the whole community, and each one of us, gaze....