The Cave of Gold A Tale of California in '49 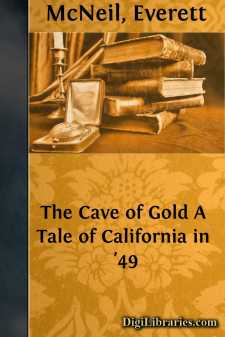 On a cold January morning of 1848, James Wilson Marshall picked up two yellow bits of metal, about the size and the shape of split peas, from the tail-race of the sawmill he was building on the South Fork of the American River, some forty-five miles northeast of Sutter's Fort, now Sacramento City. These two yellow pellets proved to be gold; and soon it was discovered that all the region thereabouts was thickly sown with shining particles of the same precious yellow metal. A few months later and all the world was pouring its most adventurous spirits into the wilderness of California.

This discovery of gold in California and the remarkable inpouring of men that followed, meant very much to the United States. In a few months it cleared a wilderness and built up a great state. In one step it advanced the interests and the importance of the United States half a century in the policies and the commerce of the Pacific. It threw wide open the great doors of the West and invited the world to enter. It poured into the pockets of the people and into the treasury of the United States a vast amount of gold—alas! soon to be sorely needed to defray the expenses of the most costly war of the ages. Indeed, when the length and the breadth of its influence is considered, this discovery of gold in California becomes one of the most important factors in the developing of our nation, the great corner-stone in the upbuilding of the West; and, as such, it deserves a much more important place in the history of the United States than any historian has yet given to it.

In the present story an attempt has been made, not only to tell an interesting tale, but to interest the younger generation in this remarkable and dramatic phase of our national development, possibly the most picturesque and dramatic period in the history of the nation: to picture to them how these knights of the pick and the shovel lived and worked, how they found and wrested the gold from the hard hand of nature, and to give to them something of an idea of the hardships and the perils they were obliged to endure while doing it.

The period was a dramatic period, crowded with unusual and startling happenings, as far removed as possible from the quiet commonplaceness and routine life of the average boy and girl of to-day; and the reader is cautioned to remember this—if disposed at any time to think the incidents narrated in the present tale too improbable or too startling to have ever happened—that they could not happen to-day, even in California; but they might have all happened then and there in California.

The author is one of those who believe that the boys and the girls of to-day should know something of the foundation stones on which the superstructure of our national greatness rests, and how and with what toils and perils they were laid; and, it is in the hope that the reading of this story will interest them in this, the laying of the great corner-stone in the upbuilding of the West, that this tale of the Discovery of Gold in California has been written.

No nation can afford to forget its builders.

ILLUSTRATIONS The Cave of Gold CHAPTER I EL FEROZ

"Whoa!"—"whoa!" With quick jerks on their bridle reins Thure Conroyal and Bud Randolph pulled up their horses and listened shiveringly.

Again that same shrill whistling scream of dreadful agony and fear, that had caused them to rein up their horses so suddenly a moment before, came from the valley beyond the brow of the little hill up which they had been slowly riding, and chilled the very marrow in their bones with the terrible intensity of its fear and anguish. Then all was still.

"What—what was it?" and Thure turned a startled face to Bud. "It didn't sound human and I never heard an animal scream like that before. What can it be?"

"I don't know," Bud answered, his face whitening a little; "but I am going to find out. Come on," and, swinging his rifle into position where it would be ready for instant use, he started up the hill, his eyes fixed in the direction whence had come those fearful screams.

"We'd better go a little slow, until we find out what it is," cautioned Thure, as he quickly fell in by the side of Bud, his own rifle held ready for instant use. "It might be Indian devilment of some kind. You know dad's last letter from the mines said that the Indians were getting ugly; and if it is hostile Indians, we want to see them first."

"You bet we do," was Bud's emphatic rejoinder, as he again pulled up his horse. "Now, just hold Gray Cloud and I'll scout on ahead and see what's going on down there in the valley before we show ourselves," and, sliding swiftly from Gray Cloud's back, he tossed his bridle rein to Thure, and, rifle in hand, started swiftly and as silently as an Indian toward a thick clump of bushes that grew directly on the top of the little hill.

Thure deftly caught the bridle rein; and then sat silent and motionless on the back of his horse, his eyes on his comrade, waiting in tense expectancy for the moment when he would reach the clump of bushes and look down into the valley beyond and see the cause of those strange and terrible cries that had so suddenly and so fearfully startled them.

Bud, carrying his cocked rifle at trail, his form bent so that the least possible part of his body showed above the grass of the hillside, ran swiftly until he had almost reached the brow of the hill and the clump of bushes. Then, crouching closer to the ground, he crept cautiously and slowly to the bushes and, gently working himself into their midst, carefully parted the branches in front of his face until he had a clear view of the little valley below. At the first sight he uttered an exclamation of surprise and wrath and threw his rifle to his shoulder; but, with a regretful shake of his head, he almost instantly lowered the gun, and, turning quickly about, motioned excitedly for Thure to advance with the horses and started on the run to meet him....