The Cave Boy of the Age of Stone

by Margaret A. McIntyre 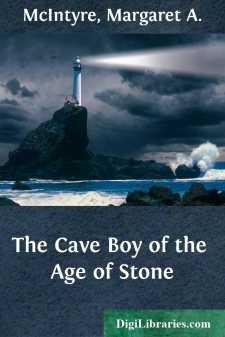 It was spring, thousands of years ago. Little boys snatched the April violets, and with them painted purple stripes upon their arms and faces. Then they played that enemies came.

"Be afraid!" shouted one, frowning; and he stamped his foot and shook his fist at the play enemies.

"I am fine!" called the other; and he held his head high, and took big steps, and looked this way and that.

The little brothers were named Thorn and Pineknot. Their baby sister had no name. The children looked rough and wild and strong and glad. The sun had made them brown, the wind had tangled their hair. Their clothes were only bits of fox skin. Their home was the safe rock cave in the side of the hill.

Near the children a little goat was eating the sweet new grass. She was tied with a string made of skin. Thorn stroked her and, laughing, said,

"Let us put the baby on the goat's back and see her run."

"Oh, that would be fun!" cried Pineknot, and he ran and untied the goat.

Laughing, Thorn put the baby on the goat's back. The little fingers clung to the goat's hair.

Then Thorn struck the goat and shouted, "Run!"

The goat ran; the baby laughed; Pineknot danced and clapped his hands. All at once, the goat stood up on her hind legs. The baby fell off, and rolled over and over on the ground. She cried out, though she was not hurt. And the boys laughed and shouted till the woods rang.

[Illustration: All at once, the goat stood up on her hind legs]

After a while Pineknot thought of the goat; he had not tied her.

"Where is the little goat? Oh, there she is up among the rocks. She did not run away, Thorn."

"No," said Thorn, "she will not run away now, for we pet her and give her things to eat. Mother feeds her, too."

"Oh, but she was a wild one when father brought her home," said Pineknot. "Father killed the mother goat and caught the young one alive. He said that he would keep her at the cave. Then some day when he had killed nothing on the hunt, and we were hungry, he would kill the goat."

"We will ask father not to kill her, but let us keep her for a pet," said Thorn.

As the boys were talking, from far away through the forest came a big, merry song:

"It is father coming from the hunt," said Thorn, jumping to his feet.

Thorn threw the baby on his back, and together the boys ran into the forest to meet their father.

The forest—oh, it was beautiful! The trunks of the old trees were big and rough and mossy. And there were tall ferns and gray rocks and little brooks, and there was a sweet smell of rotting leaves.

still sang the young hunter, shaking his red hair gaily. He was not tall, but his legs were big, for he ran after the wild horse and deer and ox. And his arms were big, because he threw a great spear and a stone ax....