The Cause of it All 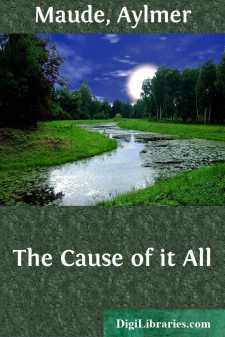 Autumn. A peasant's hut, with a small room partitioned off. AkulÃ­na sits spinning; Martha the housewife is kneading bread; little Paráshka is rocking a cradle.

MARTHA. Oh dear, my heart feels heavy! I know it means trouble; there's nothing to keep him there. It will again be like the other day, when he went to town to sell the firewood and drank nearly half of it. And he blames me for everything.

AKULÍNA. Why look for trouble? It is still early, and the town is a long way off. For the present …

MARTHA. What do you mean by early? AkÃ­mych is back already. He started after Michael but Michael's not back yet! It's worry worry all day long; that's all the pleasure one gets.

AKULÍNA. AkÃ­mych took his load straight to a customer; but our man took his to sell at the market.

MARTHA. If he were alone I shouldn't worry, but Ignát is with him; and when he's with that lousy hound (God forgive me!), he's sure to get drunk. Early and late one toils and moils. Everything is on our shoulders! If one only got anything by it! But no! hustling about all day long is all the pleasure one gets.

Door opens and Tarás enters with a ragged Tramp.

TARÁS. Good day to you! I've brought a man who wants a night's lodging.

TRAMP [bows] My respects to you.

TARÁS. Everyone in turn has to put them up.

MARTHA. It's all very well to say “everyone in turn,” but I have children, and besides, the master is not at home to-day.

TARÁS. Never mind, let the fellow sleep here to-night; he'll not wear out the place he lies on.

AKULÍNA [to Tramp] Come in and sit down, and be our guest.

TRAMP. I tender my gratitude. I should like a bite of something, if possible.

MARTHA. You haven't had time to look round, and want to eat already. Didn't you beg anything in the village?

TRAMP [sighs] I'm not in the habit of begging because of my position, and having no producks of my own …

AkulÃ­na rises, goes to the table, takes a loaf of bread, cuts a slice, and gives it to the Tramp.

TRAMP [taking the bread] Merci. [Sits down on the bench and eats greedily].

TARÁS. And where is Michael?

MARTHA. Why, he took hay to the town. It's time he was back, but he's not here. Something must have happened.

TARÁS. Why, what should happen?

MARTHA. What indeed? Not anything good; it's only bad one has to expect. As soon as he's out of the house he forgets all about us! I expect he'll come back tipsy!

AKULÍNA [sitting down to spin, points at Martha and says to Tarás] It's not in her to be quiet. As I always say, we women must find something to grumble about.

MARTHA. If he were alone I should not be afraid, but he went with Ignát.