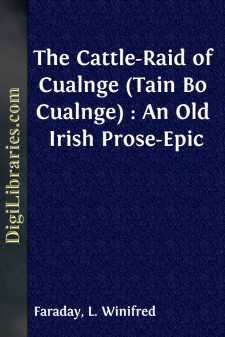 The Cattle-Raid of Cualnge [Note: Pronounce Cooley] is the chief story belonging to the heroic cycle of Ulster, which had its centre in the deeds of the Ulster king, Conchobar Mac Nessa, and his nephew and chief warrior, Cuchulainn Mac Sualtaim. Tradition places their date at the beginning of the Christian era.

The events leading up to this tale, the most famous of Irish mythical stories, may be shortly summarised here from the Book of Leinster introduction to the Tain, and from the other tales belonging to the Ulster cycle.

It is elsewhere narrated that the Dun Bull of Cualnge, for whose sake Ailill and Medb [Note: Pronounce Maive.], the king and queen of Connaught, undertook this expedition, was one of two bulls in whom two rival swineherds, belonging to the supernatural race known as the people of the Sid, or fairy-mounds, were re-incarnated, after passing through various other forms. The other bull, Findbennach, the White-horned, was in the herd of Medb at Cruachan Ai, the Connaught capital, but left it to join Ailill's herd. This caused Ailill's possessions to exceed Medb's, and to equalise matters she determined to secure the great Dun Bull, who alone equalled the White-horned. An embassy to the owner of the Dun Bull failed, and Ailill and Medb therefore began preparations for an invasion of Ulster, in which province (then ruled by Conchobar Mac Nessa) Cualnge was situated. A number of smaller Tana, or cattle-raids, prefatory to the great Tain Bo Cuailnge, relate some of their efforts to procure allies and provisions.

Medb chose for the expedition the time when Conchobar and all the warriors of Ulster, except Cuchulainn and Sualtaim, were at their capital, Emain Macha, in a sickness which fell on them periodically, making them powerless for action; another story relates the cause of this sickness, the effect of a curse laid on them by a fairy woman. Ulster was therefore defended only by the seventeen-year-old Cuchulainn, for Sualtaim's appearance is only spasmodic. Cuchulainn (Culann's Hound) was the son of Dechtire, the king's sister, his father being, in different accounts, either Sualtaim, an Ulster warrior; Lug Mac Ethlend, one of the divine heroes from the Sid, or fairy-mound; or Conchobar himself. The two former both appear as Cuchulainn's father in the present narrative. Cuchulainn is accompanied, throughout the adventures here told, by his charioteer, Loeg Mac Riangabra.

In Medb's force were several Ulster heroes, including Cormac Condlongas, son of Conchobar, Conall Cernach, Dubthach Doeltenga, Fiacha Mac Firfebe, and Fergus Mac Roich. These were exiled from Ulster through a bitter quarrel with Conchobar, who had caused the betrayal and murder of the sons of Uisnech, when they had come to Ulster under the sworn protection of Fergus, as told in the Exile of the Sons of Uisnech. [Note: 1 Text in Windisch and Stokes's Irische Texte; English translation in Miss Hull's Cuchullin Saga.] The Ulster mischief-maker, Bricriu of the Poison-tongue, was also with the Connaught army....