The Cathedrals of Northern France 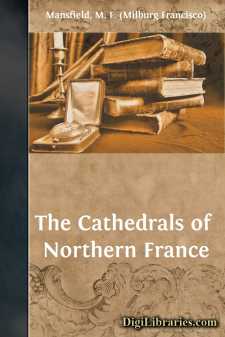 "There are two ways of writing a book of travel: to recount the journey itself or the results of it." This is also the case with regard to any work which attempts to purvey topographical or historical information of a nature which is only to be gathered upon the spot; and, when an additional side-light is shown by reason of the inclusion, as in the present instance, of the artistic and religious element, it becomes more and more a question of judicious selection and arrangement of fact, rather than a mere hazarding of opinions, which, in many cases, can be naught but conjecture, and may, in spite of any good claim to authoritativeness, be misunderstood or perverted to an inutile end, or, what is worse, swallowed in that oblivion where lies so much excellent thought, which, lacking either balance or timeliness, has become stranded, wrecked, and practically lost to view because of its unappropriate and unattractive presentation.

To-day, the purely technical writer may have little hope of immortality unless he is broad-minded enough to take a cultivated interest in many matters outside the ken of his own particular sphere. The best-equipped person living could not produce a new "Dictionary of Architecture," and expect it to fill any niche that may be waiting for such a work, unless he brought to bear, in addition to his own special knowledge, something of the statistician, something of the professed compiler, and, if possible, a little of the not unimportant knowledge possessed by the maker and seller of books, meaning—the publisher. Given these qualifications, it is likely that he will then produce an ensemble as far in advance of what otherwise might have been as is the modern printing machine, as a factor in the dissemination of literature, as compared with the ancient scribes working to the same end.

The sentimentalist and rhapsodist in words and ideas is a dwindling factor at the present day, and a new presentation of fact is occasionally to be met with in the printed page. The best "book of travel" within the knowledge of the writer, and perhaps one of the slightest in bulk ever written in the English language, is Stevenson's "Inland Voyage"—here were imagination, appreciation, and a new way of seeing things, and, above all, enthusiasm; and this is the formula upon which doubtless many a future writer will build his reputation, though he may never reach the significant heights expressed by Stevenson in the picturesque wording of his wish to be made Bishop of Noyon.

This apparent digression into a critical estimate of the making of books is but another expression of the justification of the writer in the attempt herein made to set forth in attractive and enduring form certain facts and realities with regard to the grand and glorious group of cathedrals of Northern France.

They have appeared as demanding something more than the conventional guide-book, or even technical estimates as to their perfections, and the belief is that the gathering together, after this fashion, of the contemporary information not always to the hand of the general reader presents an attraction as appealing and deserving of a place on the book-shelf as would be an avowed reference work, or a volume made to sell on the strength of its bulk or ornateness, or, lacking these questionable attributes, presented in the guise of a whilom text-book, the sole province of which is to impart "knowledge" after a certain well recognized and set pattern....