The Casual Ward academic and other oddments

by A. D. (Alfred Denis) Godley 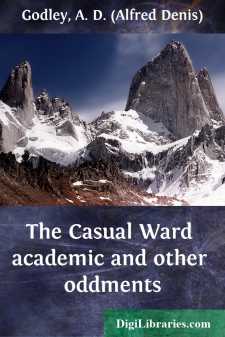 I.  Not concerning a thing of no moment, O Conscript Fathers, you are now called upon to decide: whether to one man by the counsel and advice of Curators it is to be permitted that he should take away from you the power of placing in the Proscholium the instruments of celerity, the assistances of (your) feet, the machines appointed by a certain natural providence for the performance of your duties: whether, in which place our ancestors sold pigs with the greatest consent and indeed applause of the Roman people, from that (place) bicycles are to be ejected by one guardian of books.  O singular impudence of the man!  For be unwilling, Conscript Fathers, be unwilling to believe that in this pretence of consulting for (the interests of) a public building something more is not also being aimed at and sought to be obtained: in such a way (lit. so) he attacks bicycles that in reality he endeavours to oppress the liberty of each one of you: that by this example and as it were by the thin end of a certain wedge he may lay the foundation of a royal power over all these things, which I (as) consul preserved.  Concerning which matter I could say much, if time allowed me: now behold and examine the miserable condition of those whom a man devoid of constancy and gravity overturns from (their) fortunes.

II.  What! shall the Masters of Arts, what! shall the Doctors, what! shall the Proctors themselves (than which kind of men nothing can exist more holy, nothing more upright, nothing more auspiciously established) be compelled to come on foot that they may consult those most sacred volumes in which the Roman people have wished that all learning should be included?  The Hypobibliothecarii, what men! what citizens! will, I believe, walk, especially considering that it is to be contended by them against the lengthiness of a journey: and then, if, as (usually) happens, some sudden tempest should arise, they must suffer (their) bicycles lacking shelter to be most miserably corrupted by rain.  It has been handed down to memory, Conscript Fathers, that Caius Duilius was permitted by the republic, which he had saved by (his) incredible fortitude, to be borne by an elephant whenever he had been invited to a dinner.  Therefore, did he use a most luxurious quadruped that he might by so much the more quickly arrive at a banquet: shall we, who desire to hasten not for the sake of lust and the belly, but for the sake of this learning and books, be forbidden to employ bicycles?  I pray and entreat you, Conscript Fathers, do not allow this disgrace to be branded upon the heart itself and entrails of the commonwealth.

III.  But for(sooth) the College of All Souls (which I name; for the sake of honour) is near, in which machines may be sheltered.  O thing before unheard (of)!  From which place even undergraduates have been excluded by a certain divine will: into that shall bicycles be thrown?  O times, O manners!  It is not fitting, Conscript Fathers, that the studies of most learned men, Fellows, should be interrupted in this way.  Moreover, they also have a library, that to them also it may be possible to say that wheels should be kept afar off: they have keys, bolts, bars, a gate, a porter: they will exclude, reject, expectorate them.  Which act I blame in such a way that I confess and acknowledge that it will be done with the greatest legality.

IV.  If the Founder of the Library, if Sir Thomas Bodley himself, I say, should stand forth from the Elysian fields, it is not necessary that I should remind you with what ancient severity he would inveigh against this new power, against the Bibliothecarius, nay rather, against the Curators themselves: for you can calculate (it) in (your) minds.  He would say to them, “Did I give you authority over books, that you should use it against bicycles? did I place you in an upper part of a most convenient building, that you should also rule the lower? did I endow you with huge wealth and an enormousness of stipend, that you should therefore the more exercise a kingly dominion over the common utility, and the necks, heads, lives, fortunes of the poorer citizens?”  To which interrogation and most stern reproach I do not think they, although they are of a remarkable audacity, could answer anything: for neither is there (anything) that can be replied....