The Carmina of Caius Valerius Catullus 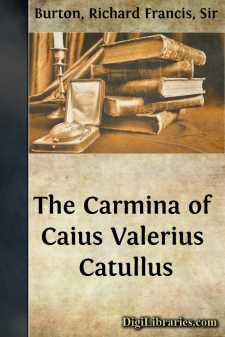 By every right I ought to choose you to edit and bring out Sir Richard Burton's translation of Catullus, because you collaborated with him on this work by a correspondence of many months before he died. If I have hesitated so long as to its production, it was because his notes, which are mostly like pencilled cobwebs, strewn all over his Latin edition, were headed, "NEVER SHEW HALF-FINISHED WORK TO WOMEN OR FOOLS." The reason of this remark was, that in all his writings, his first copy, his first thought, was always the best and the most powerful. Like many a painter who will go on improving and touching up his picture till he has destroyed the likeness, and the startling realistic nature of his subject, so would Sir Richard go on weakening his first copy by improvements, and then appeal to me to say which was the best. I was almost invariably obliged, in conscience, to induce him to stick to the first thought, which had grasped the whole meaning like a flash. These notes were made in a most curious way. He used to bring his Latin Catullus down to table d'hôte with him, and he used to come and sit by me, but the moment he got a person on the other side, who did not interest him, he used to whisper to me, "Talk, that I may do my Catullus," and between the courses he wrote what I now give you. The public school-boy is taught that the Atys was unique in subject and metre, that it was the greatest and most remarkable poem in Latin literature, famous for the fiery vehemence of the Greek dithyramb, that it was the only specimen in Latin of the Galliambic measure, so called, because sung by the Gallæ—and I suspect that the school-boy now learns that there are half a dozen others, which you can doubtless name. To my mind the gems of the whole translation are the Epithalamium or Epos of the marriage of Vinia and Manlius, and the Parcae in that of Peleus and Thetis. Sir Richard laid great stress on the following in his notes, headed "Compare with Catullus, the sweet and tender little Villanelle, by Mr. Edmund Gosse," for the Viol and Flute—the XIX cent. with the Ist.

I have been your sparrow true;

Waste no tear, and heave no sigh;

Life should still be blithe for you,

In your garden let me lie

Underneath the pointed yew,

We have loved the quiet sky

With its tender arch of blue;

That I still may feel you nigh,

In your virgin bosom, too,

Let our garden friends that fly

Be the mourners, fit and few.

Dig my grave, for I must die."