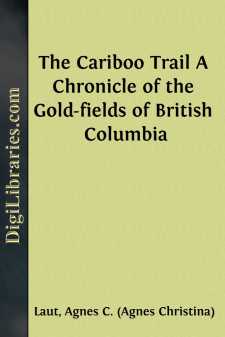 Early in 1849 the sleepy quiet of Victoria, Vancouver Island, was disturbed by the arrival of straggling groups of ragged nondescript wanderers, who were neither trappers nor settlers. They carried blanket packs on their backs and leather bags belted securely round the waist close to their pistols. They did not wear moccasins after the fashion of trappers, but heavy, knee-high, hobnailed boots. In place of guns over their shoulders, they had picks and hammers and such stout sticks as mountaineers use in climbing. They did not forgather with the Indians. They shunned the Indians and had little to say to any one. They volunteered little information as to whence they had come or whither they were going. They sought out Roderick Finlayson, chief trader for the Hudson's Bay Company. They wanted provisions from the company—yes—rice, flour, ham, salt, pepper, sugar, and tobacco; and at the smithy they demanded shovels, picks, iron ladles, and wire screens. It was only when they came to pay that Finlayson felt sure of what he had already guessed. They unstrapped those little leather bags round under their cartridge belts and produced in tiny gold nuggets the price of what they had bought.

Finlayson did not know exactly what to do. The fur-trader hated the miner. The miner, wherever he went, sounded the knell of fur-trading; and the trapper did not like to have his game preserve overrun by fellows who scared off all animals from traps, set fire going to clear away underbrush, and owned responsibility to no authority. No doubt these men were 'argonauts' drifted up from the gold diggings of California; no doubt they were searching for new mines; but who had ever heard of gold in Vancouver Island, or in New Caledonia, as the mainland was named? If there had been gold, would not the company have found it? Finlayson probably thought the easiest way to get rid of the unwelcome visitors was to let them go on into the dangers of the wilds and then spread the news of the disappointment bound to be theirs.

He handled their nuggets doubtfully. Who knew for a certainty that it was gold anyhow? They bade him lay it on the smith's anvil and strike it with a hammer. Finlayson, smiling sceptically, did as he was told. The nuggets flattened to a yellow leaf as fine and flexible as silk. Finlayson took the nuggets at eleven dollars an ounce and sent the gold down to San Francisco, very doubtful what the real value would prove. It proved sixteen dollars to the ounce.

For seven or eight years afterwards rumours kept floating in to the company's forts of finds of gold. Many of the company's servants drifted away to California in the wake of the 'Forty-Niners,' and the company found it hard to keep its trappers from deserting all up and down the Pacific Coast. The quest for gold had become a sort of yellow-fever madness. Men flung certainty to the winds and trekked recklessly to California, to Oregon, to the hinterland of the country round Colville and Okanagan. Yet nothing occurred to cause any excitement in Victoria....