The Canterbury Puzzles And Other Curious Problems 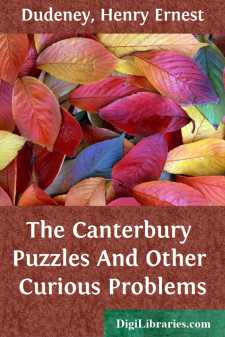 Readers of The Mill on the Floss will remember that whenever Mr. Tulliver found himself confronted by any little difficulty he was accustomed to make the trite remark, "It's a puzzling world." There can be no denying the fact that we are surrounded on every hand by posers, some of which the intellect of man has mastered, and many of which may be said to be impossible of solution. Solomon himself, who may be supposed to have been as sharp as most men at solving a puzzle, had to admit "there be three things which are too wonderful for me; yea, four which I know not: the way of an eagle in the air; the way of a serpent upon a rock; the way of a ship in the midst of the sea; and the way of a man with a maid."

Probing into the secrets of Nature is a passion with all men; only we select different lines of research. Men have spent long lives in such attempts as to turn the baser metals into gold, to discover perpetual motion, to find a cure for certain malignant diseases, and to navigate the air.

From morning to night we are being perpetually brought face to face with puzzles. But there are puzzles and puzzles. Those that are usually devised for recreation and pastime may be roughly divided into two classes: Puzzles that are built up on some interesting or informing little principle; and puzzles that conceal no principle whatever—such as a picture cut at random into little bits to be put together again, or the juvenile imbecility known as the "rebus," or "picture puzzle." The former species may be said to be adapted to the amusement of the sane man or woman; the latter can be confidently recommended to the feeble-minded.

The curious propensity for propounding puzzles is not peculiar to any race or to any period of history. It is simply innate in every intelligent man, woman, and child that has ever lived, though it is always showing itself in different forms; whether the individual be a Sphinx of Egypt, a Samson of Hebrew lore, an Indian fakir, a Chinese philosopher, a mahatma of Tibet, or a European mathematician makes little difference.

Theologian, scientist, and artisan are perpetually engaged in attempting to solve puzzles, while every game, sport, and pastime is built up of problems of greater or less difficulty. The spontaneous question asked by the child of his parent, by one cyclist of another while taking a brief rest on a stile, by a cricketer during the luncheon hour, or by a yachtsman lazily scanning the horizon, is frequently a problem of considerable difficulty. In short, we are all propounding puzzles to one another every day of our lives—without always knowing it.

A good puzzle should demand the exercise of our best wit and ingenuity, and although a knowledge of mathematics and a certain familiarity with the methods of logic are often of great service in the solution of these things, yet it sometimes happens that a kind of natural cunning and sagacity is of considerable value. For many of the best problems cannot be solved by any familiar scholastic methods, but must be attacked on entirely original lines. This is why, after a long and wide experience, one finds that particular puzzles will sometimes be solved more readily by persons possessing only naturally alert faculties than by the better educated. The best players of such puzzle games as chess and draughts are not mathematicians, though it is just possible that often they may have undeveloped mathematical minds.

It is extraordinary what fascination a good puzzle has for a great many people. We know the thing to be of trivial importance, yet we are impelled to master it; and when we have succeeded there is a pleasure and a sense of satisfaction that are a quite sufficient reward for our trouble, even when there is no prize to be won. What is this mysterious charm that many find irresistible? Why do we like to be puzzled? The curious thing is that directly the enigma is solved the interest generally vanishes. We have done it, and that is enough. But why did we ever attempt to do it?

The answer is simply that it gave us pleasure to seek the solution—that the pleasure was all in the seeking and finding for their own sakes. A good puzzle, like virtue, is its own reward. Man loves to be confronted by a mystery, and he is not entirely happy until he has solved it. We never like to feel our mental inferiority to those around us. The spirit of rivalry is innate in man; it stimulates the smallest child, in play or education, to keep level with his fellows, and in later life it turns men into great discoverers, inventors, orators, heroes, artists, and (if they have more material aims) perhaps millionaires....