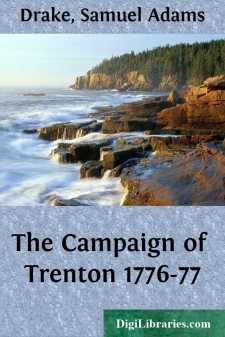 Seldom, in the annals of war, has a single campaign witnessed such a remarkable series of reverses as did that which began at Boston in March, 1776, and ended at Morristown in January, 1777. Only by successive defeats did our home-made generals and our rustic soldiery learn their costly lesson that war is not a game of chance, or mere masses of men an army.

Though costly, this sort of discipline, this education, gradually led to a closer equality between the combatants, as year after year they faced and fought each other. When the lesson was well learned our generals began to win battles, and our soldiers to fight with a confidence altogether new to them. In vain do we look for any other explanation of the sudden stiffening up of the backbone of the Revolutionary army, or of the equally sudden restoration of an apparently dead and buried cause after even its most devoted followers had given up all as lost. As with expiring breath that little band of hunted fugitives, miserable remnant of an army of 30,000 men, turning suddenly upon its victorious pursuers, dealt it blow after blow, the sun which seemed setting in darkness, again rose with new splendor upon the fortunes of these infant States.

Certainly the military, political, and moral effects of this brilliant finish to what had been a losing campaign, in which almost each succeeding day ushered in some new misfortune, were prodigious. But neither the importance nor the urgency of this masterly counter-stroke to the American cause can be at all appreciated, or even properly understood, unless what had gone before, what in fact had produced a crisis so dark and threatening, is brought fully into light. Washington himself says the act was prompted by a dire necessity. Coming from him, these words are full of meaning. We realize that the fate of the Revolution was staked upon this one last throw. If we would take the full measure of these words of his, spoken in the fullest conviction of their being final words, we must again go over the whole field, strewed with dead hopes, littered with exploded reputations, cumbered with cast-off traditions, over which the patriot army marched to its supreme trial out into the broad pathway which led to final success.

The campaign of 1776 is, therefore, far too instructive to be studied merely with reference to its crowning and concluding feature. In considering it the mind is irresistibly impelled toward one central, statuesque figure, rising high above the varying fortunes of the hour, like the Statue of Liberty out of the crash and roar of the surrounding storm.

Nowhere, we think, does Washington appear to such advantage as during this truly eventful campaign. Though sometimes troubled in spirit, he is always unshaken. Though his army was a miserable wreck, driven about at the will of the enemy, Washington was ever the rallying-point for the handful of officers and men who still surrounded him. If the cause was doomed to shipwreck, we feel that he would be the last to leave the wreck....