The Campaign of Chancellorsville 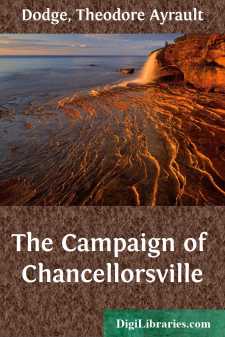 It must seem to the casual reader of the history of the war of 1861-65, that enough has already been written upon the campaign of Chancellorsville. And there are numerous brilliant essays, in the histories now before the public, which give a coup-d'oeil more or less accurate of this ten-days' passage of arms. But none of these spread before the reader facts sufficiently detailed to illustrate the particular theory advanced by each to account for the defeat of the Army of the Potomac on this field.

The stigma besmirching the character of the Eleventh Corps, and of Howard, its then commanding general, for a panic and rout in but a small degree owing to them; the unjust strictures passed upon Sedgwick for his failure to execute a practically impossible order; the truly remarkable blunders into which Gen. Hooker allowed himself to lapse, in endeavoring to explain away his responsibility for the disaster; the bare fact, indeed, that the Army of the Potomac was here beaten by Lee, with one-half its force; and the very partial publication, thus far, of the details of the campaign, and the causes of our defeat,—may stand as excuse for one more attempt to make plain its operations to the survivors of the one hundred and eighty thousand men who there bore arms, and to the few who harbor some interest in the subject as mere history.

To say that Gen. Hooker lapsed into blunders in explaining his share in this defeat, is to use a form of words purposely tempered to the memory of a gallant soldier, who, whatever his shortcomings, has done his country signal service; and to avoid the imputation of baldly throwing down the gauntlet of ungracious criticism. All reference to Gen. Hooker's skill or conduct in this, one of the best conceived and most fatally mismanaged of the many unsuccessful advances of the Army of the Potomac, is made with sincere appreciation of his many admirable qualities, frankly, and untinged by bitterness. But it must be remembered, that Gen. Hooker has left himself on record as the author of many harsh reflections upon his subordinates; and that to mete out even justice to all requires unvarnished truth.

The most uncalled-for slur upon the conduct of his lieutenants probably occurs in his testimony before the Committee on the Conduct of the War. Before withdrawing from the south side of the Rappahannock, after the decisive events of the battle-field had cooped up the army between the river and its intrenchments, Hooker called together all his corps commanders, and requested their several opinions as to the advisability of attack or retreat. Whatever discussion may have then been had, it was generally understood, in after-days, that all but one of these generals had expressed himself freely for an immediate advance. In referring to this understanding, while denying its correctness, Hooker used the following language:—

"So far as my experience extends, there are in all armies officers more valiant after the fight than while it is pending; and, when a truthful history of the Rebellion shall be written, it will be found that the Army of the Potomac is not an exception."

Merely to characterize as ungenerous this aspersion upon the courage of such men as then served under Hooker, savors of error on the side of leniency....