The Calling of Dan Matthews 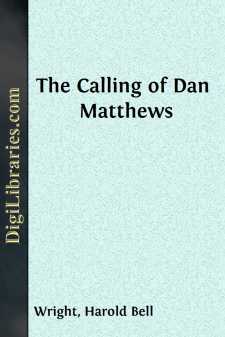 CHAPTER I. THE HOME OF THE ALLY

"And because the town of this story is what it is, there came to dwell in it a Spirit—a strange, mysterious power—playful, vicious, deadly; a Something to be at once feared and courted; to be denied—yet confessed in the denial; a deadly enemy, a welcome friend, an all-powerful Ally."

This story began in the Ozark Mountains. It follows the trail that is nobody knows how old. But mostly this story happened in Corinth, a town of the middle class in a Middle Western state.

There is nothing peculiar about Corinth. The story might have happened just as well in any other place, for the only distinguishing feature about this town is its utter lack of any distinguishing feature whatever. In all the essential elements of its life, so far as this story goes, Corinth is exactly like every other village, town or city in the land. This, indeed, is why the story happened in this particular place.

Years ago, when the railroad first climbed the backbone of the Ozarks, it found Corinth already located on the summit. Even before the war, this county-seat town was a place of no little importance, and many a good tale might be told of those exciting days when the woods were full of guerrillas and bushwhackers, and the village was raided first by one side, then by the other. Many a good tale is told, indeed; for the fathers and mothers of Corinth love to talk of the war times, and to point out in Old Town the bullet-marked buildings and the scenes of many thrilling events.

But the sons and daughters of the passing generation, with their sons and daughters, like better to talk of the great things that are going to be—when the proposed shoe-factory comes, the talked-of mills are established, the dreamed-of electric line is built out from the city, or the Capitalist from Somewhere-else arrives to invest in vacant lots, thereon to build new hotels and business blocks.

The Doctor says that in the whole history of Corinth there are only two events. The first was the coming of the railroad; the second was the death of the Doctor's good friend, the Statesman.

The railroad did not actually enter Corinth. It stopped at the front gate. But with Judge Strong's assistance the fathers and mothers recognized their "golden opportunity" and took the step which the eloquent Judge assured them would result in a "glorious future." They left the beautiful, well-drained site chosen by those who cleared the wilderness, and stretched themselves out along the mud-flat on either side of the sacred right-of-way—that same mud-flat being, incidentally, the property of the patriotic Judge.

Thus Corinth took the railroad to her heart, literally. The depot, the yards, the red section-house and the water-tank are all in the very center of the town. Every train while stopping for water (and they all stop) blocks two of the three principal streets. And when, after waiting in the rain or snow until his patience is nearly exhausted, the humble Corinthian goes to the only remaining crossing, he always gets there just in time to meet a long freight backing onto the siding....