The Call of the Beaver Patrol or, A Break in the Glacier 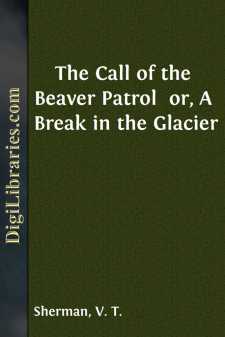 Chapter I CAMPING IN THE BREAKER

"And so I says to myself, says I, give me a good husky band of Boy Scouts! They'll do the job if it can be done!"

Case Canfield, caretaker, sat back in a patched chair in the dusky, unoccupied office of the Labyrinth mine and addressed himself to four lads of seventeen who were clad in the khaki uniform of the Boy Scouts of America.

Those of our readers who have read the previous books of this series will have good cause to remember George Benton, Charley ("Sandy") Green, Tommy Gregory and Will Smith. The adventures of these lads among the Pictured Rocks of Old Superior, among the wreckers and reptiles of the Florida Everglades, in the caverns of the Great Continental Divide, and among the snows of the Hudson Bay wilderness have been recorded under appropriate titles in previous works.

The four boys were members of the Beaver Patrol, Chicago. Will Smith was Scoutmaster, while George Benton was Patrol Leader. They wore upon the sleeves of their coats medals showing that they had passed the examination as Ambulance Aids, Stalkers, Pioneers and Seamen.

Instructed by Mr. Horton, a well-known criminal lawyer of Chicago, the boys had reached the almost deserted mine at dusk of a November day. There they had found Canfield, the caretaker, waiting for them in a dimly-lighted office. The mine had not been operated for a number of months, not because the veins had given out, but because of some misunderstanding between the owners of mines in that section.

The large, bare room in which the caretaker and the Boy Scouts met was in the breaker. There was no fire in the great heater, and the tables and chairs were black with dust. A single electric light shone down from the ceiling, creating long, ghostlike shadows as it swayed about in a gentle wind blowing through a broken window.

"Well," Tommy Gregory said, as the caretaker paused, "you've got the Boy Scouts, and it remains for you to set us to work."

"And a sturdy looking lot, too!" grinned the caretaker.

"Oh, Mr. Horton wouldn't be apt to send a lot of cripples!" laughed Sandy Green. "He's next to his job, that man is!"

"I presume he told you all about the case?" suggested Canfield.

"Indeed he did not," replied Will Smith.

"Not a thing about it?" asked the caretaker.

"He only said that you would give us full instructions."

"Perhaps he thought we wouldn't want to undertake the job if we knew exactly what it was!" suggested Sandy.

"It is a queer kind of a job," Canfield admitted, "but I don't think you boys would be apt to back out because of a little danger."

"I have wanted to back out several times," laughed Tommy, "but, somehow, these others boys wouldn't permit me to."

"Go on and tell us about it," urged Sandy. "Tell us just what you want us to do, and then we'll tell you whether we think we can do it or not."

"Mother of Moses!" exclaimed Tommy. "I hope we haven't got to go and dig up blond-haired little Algernon, or discover pretty little Clarence, and turn a bunch of money over to him!"

"I think these two boys may have money coming to them," the caretaker replied....