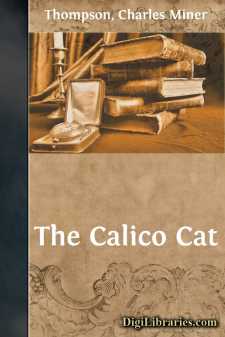 THE CALICO CAT I

Mr. peaslee looked more complacent than ever. It was Saturday noon, and Solomon had just returned from his usual morning sojourn "up-street." He had taken off his coat, and was washing his face at the sink, while his wife was "dishing up" the midday meal. There was salt codfish, soaked fresh, and stewed in milk—"picked up," as the phrase goes; there were baked potatoes and a thin, pale-looking pie. Mrs. Peaslee did not believe in pampering the flesh, and she did believe in saving every possible cent.

His wife gazed at him with interest.

"Are ye drawed?" she asked.

"Got the notice from Whitcomb right in my pocket. Grand juror. September term. 'T ain't more'n a week off."

The staccato utterance was caused by the big mouthfuls of codfish and potato which, between phrases, Mr. Peaslee conveyed to his mouth. It was plain to see that he was greatly pleased with his new dignity.

"What do they give ye for it?" asked his wife. Solomon should accept no office which did not bring profit.

"Two dollars a day and mileage," said Mr. Peaslee, with the emphasis of one who knows he will make a sensation.

"Travelin' expenses. State allows ye so much a mile. I get eight cents for goin' to the courthouse."

"Ye get eight cents every day?" asked his wife, her eyes snapping. She was vague about the duties of a grand juror; maybe he had to earn his two dollars; but she had exact ideas about the trouble of walking "up-street." To get eight cents for that was being paid for doing nothing at all, and she was much astonished at the idea.

"Likely now, ain't it?" said Mr. Peaslee, with masculine scorn. "State don't waste money that way! Mileage's to get ye there an' take ye home again when term's over. You're s'posed to stay round 'tween whiles."

"Humph!" said his wife, disappointed. "They give ye two dollars a day"—she hazarded the shot—"just for settin' round and talkin', don't they? Walkin's considerable more of an effort for most folks."

"'Settin' round an' talkin'!'" exclaimed Mr. Peaslee, so indignantly that he stopped eating for a moment, knife and fork upright in his rigid, scandalized hands, while he gazed at his thin, energetic, shrewish little wife. "'Settin' round and talkin'!' It's mighty important work, now I tell ye. I guess there wouldn't be much law and order if it wa'n't for the grand jury. They don't take none but men o' jedgment. Takes gumption, I tell ye. Ye have to pay money to get that kind."

"Well," said his wife, with the air of one who concedes an unimportant point, "anyhow, it's good pay for a man whose time ain't worth anythin'."

"Ain't worth anythin'!" exclaimed Mr. Peaslee, in hurt tones. "Now, Sarepty, ye know better'n that. I don't know how they'll get along without me up to the bank. They've got a pretty good idee o' my jedgment 'bout mortgages. They don't pass any without my say so."

Mrs. Peaslee sniffed. "I've seen ye in the bank window, settin' round with Jim Bartlett and Si Spooner and the rest of 'em....