The Cabman's Story The Mysteries of a London 'Growler' 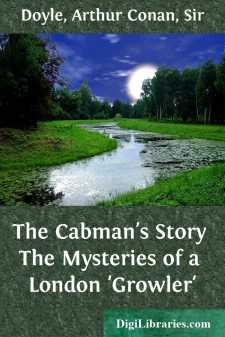 The Mysteries of a London "Growler"

We had to take a "growler," for the day looked rather threatening and we agreed that it would be a very bad way of beginning our holiday by getting wet, especially when Fanny was only just coming round from the whooping cough. Holidays were rather scarce with us, and when we took one we generally arranged some little treat, and went in for enjoying ourselves. On this occasion we were starting off from Hammersmith to the Alexandra Palace in all the dignity of a four-wheeler. What with the wife and her sister, and Tommy and Fanny and Jack, the inside was pretty well filled up, so I had to look out for myself. I didn't adopt the plan of John Gilpin under similar circumstances, but I took my waterproof and climbed up beside the driver.

This driver was a knowing-looking old veteran, with a weather-beaten face and white side whiskers. It has always seemed to me that a London cabman is about the shrewdest of the human race, but this specimen struck me as looking like the shrewdest of the cabmen. I tried to draw him out a bit as we jogged along, for I am always fond of a chat; but he was a bit rusty until I oiled his tongue with glass of gin when we got as far as the "Green Anchor." Then he rattled away quickly enough, and some of what he said is worth trying to put down in black and white.

"Wouldn't a hansom pay me better?" he said, in answer to a question of mine. "Why, of course it would. But look at the position! A four-wheeler's a respectable conveyance, and the driver of it's a respectable man, but you can't say that of a rattling, splashing 'ansom. Any boy would do for that job. Now, to my mind money hain't to be compared to position, whatever a man's trade may be."

"Certainly not!" I answered.

"Besides, I've saved my little penny, and I'm got too old to change my ways. I've begun on a growler, and I'll end on one. If you'll believe me, sir, I've been on the streets for seven-and-forty year."

"Well, it's long for our trade," he replied. "You see, there ain't no other in the world that takes the steam out of a man so quickly— what with wet and cold and late hours, and maybe no hours at all. There's few that lasts at it as long as I have."

"You must have seen a deal of the world during that time," I remarked. "There are few men who can have greater opportunities of seeing life."

"The world!" he grunted, flicking up the horse with his whip. "I've seen enough of it to be well-nigh sick of it. As to life, if you'd said death, you'd ha' been nearer the mark."

"Yes, death," he said. "Why, bless your soul, sir, if I was to write down all I've seen since I've been in the trade, there's not a man in London would believe me, unless maybe some o' the other cabbies. I tell ye I took a dead man for a fare once, and drove about with him nigh half the night. Oh, you needn't look shocked, sir, for this wasn't the cab—no, nor the last one I had neither."

"How did it happen?" I asked, feeling glad, in spite of his assurance, that Matilda had not heard of the episode....