The Burial of the Guns 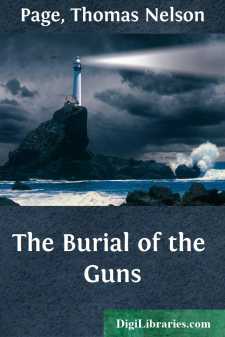 We do not keep Christmas now as we used to do in old Hanover. We have not time for it, and it does not seem like the same thing. Christmas, however, always brings up to me my cousin Fanny; I suppose because she always was so foolish about Christmas.

My cousin Fanny was an old maid; indeed, to follow St. Paul's turn of phrase, she was an old maid of the old maids. No one who saw her a moment could have doubted it. Old maids have from most people a feeling rather akin to pity—a hard heritage. They very often have this feeling from the young. This must be the hardest part of all—to see around them friends, each "a happy mother of children," little ones responding to affection with the sweet caresses of childhood, whilst any advances that they, their aunts or cousins, may make are met with indifference or condescension. My cousin Fanny was no exception. She was as proud as Lucifer; yet she went through life—the part that I knew of—bearing the pity of the great majority of the people who knew her.

She lived at an old place called "Woodside", which had been in the family for a great many years; indeed, ever since before the Revolution. The neighborhood dated back to the time of the colony, and Woodside was one of the old places. My cousin Fanny's grandmother had stood in the door of her chamber with her large scissors in her hand, and defied Tarleton's red-coated troopers to touch the basket of old communion-plate which she had hung on her arm.

The house was a large brick edifice, with a pyramidal roof, covered with moss, small windows, porticos with pillars somewhat out of repair, a big, high hall, and a staircase wide enough to drive a gig up it if it could have turned the corners. A grove of great forest oaks and poplars densely shaded it, and made it look rather gloomy; and the garden, with the old graveyard covered with periwinkle at one end, was almost in front, while the side of the wood—a primeval forest, from which the place took its name—came up so close as to form a strong, dark background. During the war the place, like most others in that neighborhood, suffered greatly, and only a sudden exhibition of spirit on Cousin Fanny's part saved it from a worse fate. After the war it went down; the fields were poor, and grew up in briers and sassafras, and the house was too large and out of repair to keep from decay, the ownership of it being divided between Cousin Fanny and other members of the family. Cousin Fanny had no means whatever, so that it soon was in a bad condition. The rest of the family, as they grew up, went off, compelled by necessity to seek some means of livelihood, and would have taken Cousin Fanny too if she would have gone; but she would not go. They did all they could for her, but she preferred to hang around the old place, and to do what she could with her "mammy", and "old Stephen", her mammy's husband, who alone remained in the quarters. She lived in a part of the house, locking up the rest, and from time to time visited among her friends and relatives, who always received her hospitably....