The Brownings Their Life and Art 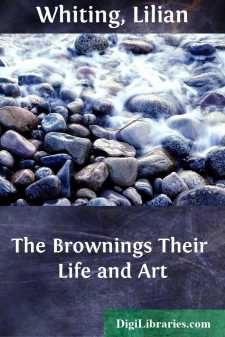 CHAPTER I 1812-1833 “Allons! after the Great Companions! and to belong to them!”“To know the universe itself as a road—as many roads—asroads for travelling souls.”

Such a very page de Contes is the life of the wedded poets, Robert and Elizabeth Barrett Browning, that it is difficult to realize that this immortal idyl of Poetry, Genius, and Love was less than fifteen years in duration, out of his seventy-seven, and her fifty-five years of life. It is a story that has touched the entire world

this story of beautiful associations and friendships, of artistic creation, and of the entrance on a wonderful realm of inspiration and loveliness. At the time of their marriage he was in his thirty-fifth, and she in her forty-first year, although she is described as looking so youthful that she was like a girl, in her slender, flower-like grace; and he lived on for twenty-eight years after

“Clouds and darknessFell upon Camelot,”

with the death of his “Lyric Love.” The story of the most beautiful romance that the world has ever known thus falls into three distinctive periods,—that of the separate life of each up to the time of their marriage; their married life, with its scenic setting in the enchantment of Italy; and his life after her withdrawal from earthly scenes. The story is also of duplex texture; for the outer life, rich in associations, travel, impressions, is but the visible side of the life of great creative art. A delightful journey is made, but its record is not limited to the enjoyment of friends and place; a poem is written whose charm and power persist through all the years.

Made in 1861 by William Wetmore Story

No adequate word could be written of the Brownings that did not take account of this twofold life of the poets. It is almost unprecedented that the power and resplendence and beauty of the life of art should find, in the temporal environment, so eminent a correspondence of beauty as it did with Robert and Elizabeth Browning. Not that they were in any wise exempt from sorrow and pain; the poet, least of all, would choose to be translated, even if he might, to some enchanted region remote from all the mingled experiences of humanity; it is the common lot of destiny, with its prismatic blending of failure and success, of purpose and achievement, of hope and defeat, of love and sorrow, out of which the poet draws his song. He would not choose

“That jar of violet wine set in the air,That palest rose sweet in the night of life,”

to the exclusion of the common experiences of the day.

“Who never ate his bread in sorrow,Who never spent the darksome hoursWeeping, and watching for the morrow,He knows you not, ye unseen Powers.”

But to those who, poets or otherwise, see life somewhat in the true proportion of its lasting relations, events are largely transmuted into experiences, and are realized in their extended relations. The destiny of the Brownings led them into constantly picturesque surroundings; and the force and manliness of his nature, the tender sweetness and playful loveliness of hers, combined with their vast intellectual range, their mutual genius for friendships, their devotion to each other and to their son, their reverence for their art, and their lofty and noble spirituality of nature,—all united to produce this exquisite and unrivaled romance of life,—

“A Beauty passing the earth’s store.”

The rapture of the poet’s dream pervaded every experience.

The transmutation of each into the other, both Life and Poetry, as revealed in their lives, is something as exceptional as it is beautiful in the world’s history....