The Brochure Series of Architectural Illustration, Volume 01, No. 11, November, 1895 The Country Houses of Normandy 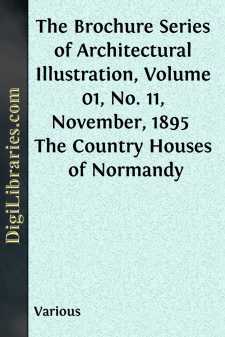 THE COUNTRY HOUSES OF NORMANDY.

THE houses chosen for illustration in this number are of different types, of different dates, built for men of different stations in life, and are constructed of different materials. They are, however, all in the province of Normandy, in northern France, and they are all situated outside the towns; further than this it may not be well to go in attempting to classify them under one head. Like the subjects chosen for our last issue, they contain many suggestive ideas for treatment of similar problems in our own country, and for this reason they deserve special attention.

The tendency among the French has always been strong to build their houses in compact groups, and detached buildings with free space on all sides are the exception even in the country. Mr. Louis H. Gibson, whose book "Beautiful Houses" we have noticed in another column, says of the French domestic architecture:—

"Excepting the châteaux, the structures of which we have the completest record are almost entirely buildings fronting directly on the street or road. In France it is rare indeed that one sees an isolated building with a free passage around it, as is common in our American towns and cities. It is not at all uncommon for a farm building to be constructed within a wall; again, the farmer's house may be almost flush with the road. Little farm communities, with the buildings abutting on one another, are very common, because of the companionship which such association brings. This was not alone true in the early history of France, but obtains in the construction of to-day. The small towns, as well as the cities, are almost universally built very compactly. Thus we may expect to see very few examples of isolated structures in France."

In this respect it will be seen the taste of the French house builder differs from ours where open space about a dwelling-house is considered one of its important attractions. Consequently the examples here shown should not be considered as typical of French domestic architecture. The town house is, if anything, the type.

Most of the examples which we have chosen belong to the sixteenth century or thereabouts. The Manoir d'Ango, of which we gave four views in last month's issue and of which three more are now shown, was built about the middle of the sixteenth century, and the manoir at Archelles was also built about the same time. It was also during this century that the best and most interesting of the French half-timber work was done, and although we have no data at hand for determining the matter, we judge that the two examples here illustrated date from about this time. The construction in these buildings is doubtless the same as that commonly used in others of this character—a strong framework of timber filled in with brick masonry and then plastered. Many of the town houses built in this way were very elaborate and were adorned with exquisite carved wood ornament. In Verdier and Cattois' "Architecture Civile et Domestique" may be found numerous examples, and in a future number of The Brochure Series we shall give place to some of the most attractive.