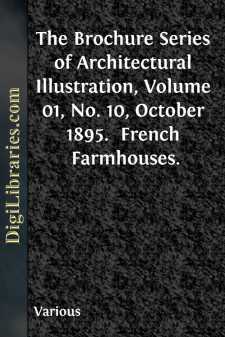 As it is the purpose of THE BROCHURE SERIES to cover as wide a field as possible in choice of subject matter for its illustrations, and at the same time hold rigidly to the idea of furnishing only what will be useful to its subscribers, it has seemed desirable to present something a little nearer our everyday life than the Italian work which has thus far formed the greater part of the plate matter.

The domestic architecture of France and England has naturally served as a model for a great deal of our American work, and especially is this noticeable during the present generation in the close relation between the French châteaux and the more pretentious American residences, as witness the recent productions of the late Mr. Hunt, which have just been published since his death. We are, to be sure, looking in all directions for suggestions, and it cannot help appearing wonderful to a thoughtful observer how many and varied these suggestions are.

Our wealthy citizens are building châteaux in the style of Francis I or of somebody else, Venetian or Florentine palaces, Roman villas, Flemish guild-halls, Elizabethan half-timber houses. All, if tastefully and skilfully designed and placed, have their special points of beauty and excellence, and all may in the hands of an architect of ability be made to harmonize with our modern ways of living and the surroundings in which they must take a part.

None of these models, however, are more adaptable to our ways than the country houses of France. This, of course, should not be understood as meaning that any of these buildings can be transplanted bodily to American soil and still be satisfactory. Architectural borrowing of this class is never satisfactory; but no architecture of which we have any knowledge is independent of precedent, and it only behooves us to adopt from the experience of others those features or ideas which are most suited to our needs. The plans and the original uses of the rooms of these French manoirs may not prove directly adaptable to our ways of living, but the general massing of the design and the rambling arrangement of plan, as well as the picturesqueness of it all, are characteristics which can well be embodied in our country houses. In their way, no better models can be found than the two manoirs from Normandy which we illustrate in this number. They have both suffered from the ravages of time and hard usage, and both are at present, and for a long time have been, used as farmhouses. The Manoir d'Ango is the finer and more important of the two, and is better preserved in some of its more interesting features.

It is one of the main beauties of the charming village of Varengeville-sur-Mer, on the north coast of Normandy. It is now converted into a farmhouse, but in it once a celebrated privateersman of Dieppe received the ambassadors of the King of Portugual. There are still many evidences of the former dignity and grandeur in its present degradation.