The Brochure Series of Architectural Illustration, Volume 01, No. 08, August 1895 Fragments of Greek Detail 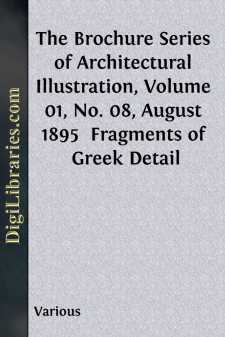 The Art of Greece during the fifth century, B.C., was developed in an amazingly short time from a condition of almost archaic rudeness to that of the greatest perfection which the world has ever seen.

At the close of the Persian wars the Athenians, under Pericles, began rebuilding their city and perfecting themselves in all the arts of civilization, and their progress in the next half century will always be a subject for wonder. It is especially wonderful that works of art of the character produced at this time should have been the outcome of political maneuvering: for if Plutarch is to be credited the scheming of Pericles to obtain and hold possession of the government of Athens was the immediate cause of the erection of these marvellous monuments. In order to increase his influence with the common people Pericles devoted the treasure which had been contributed by the other Greek cities for defence against the barbarians to the beautifying of Athens, and to furnishing them with games and amusements, and especially to the erection of the group of temples upon the Acropolis, in this way distributing patronage and keeping his people employed much as a modern political "boss" does the same in our day.

The Parthenon, which is esteemed the grandest of all monuments of Greek art, embodying as it does the highest achievement in sculpture and architecture, was built just after the middle of the fifth century, although the precise date at which it was begun and finished is uncertain. The Erechtheion and Propylæa were probably built a few years later, but their exact dates are also in doubt.

The sculptor, Phidias, was the friend and adviser of Pericles and to him was given the general charge of all matters relating to art. Under him were grouped architects, sculptors, and artisans of all schools and trades—Ictinus and Calicrates as architects of the Parthenon, Mnesicles of the Propylæa, and many others—such an assemblage as only Greece in her most glorious epoch could bring together. The work of this period shows that happy union of technical perfection and the expression of only the loftiest ideas, in which, as Plutarch says, the architect made it his ambition to "surpass the magnificence of his design with the elegance of its execution."

The skill and delicacy as well as the subtle appreciation of refinements of form and finish exhibited in the treatment of details such as those shown in our plates are almost beyond comprehension. The workmanship is so perfect that it is difficult to see how it could be improved upon. Stuart, in his account of the Parthenon, states that he found two stones, one merely laid upon the other in the stylobate of this building, which had been ground to so fine a joint that they had actually united and become one. The refinements in measurements are such that it has been asserted that a variation of one twentieth of an inch from the dimensions intended is all that need be allowed—the width of the two ends of the building agreeing to within this amount....