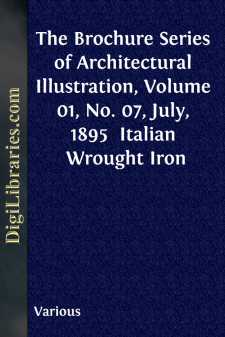 The wrought iron of the middle ages, and of the time of the Renaissance, and even down to the last century, in Italy, France, and Germany showed, in the crudest examples, the principal virtues of all true decorative art. The reason is not far to seek. The difficulties in the way of working the material with ease imposed certain limitations in design and execution which could not well be disregarded. The lack of machinery (which is responsible for much of the uninteresting character of our modern work) necessarily compelled the use of comparatively simple and straightforward methods. It was difficult to avoid the tell-tale marks of the smith's work, and there were limits beyond which his skill could not carry it. Furthermore the designer, taking these limitations into account, learned to make the most of his possibilities, and to adapt his design to the material—to design in the material. How different from the methods generally in use now! Designs made to imitate something done in another material, turned out by the hundred from a machine which leaves no indication of its work, with all interest of craftsmanship lacking, except in places where it may be vulgarly thrown in your face to make it look as if it had been "hand-made."

Clever imitations of old work are produced, and indeed some of the examples shown in our plates are reproductions and not originals; and if we cannot have new designs of equal excellence this is the next most desirable thing. And so far as the illustrations are concerned the difference between the original and the reproduction could never be distinguished.

The subjects chosen for the illustrations of this number are lanterns and torch-bearers. The lanterns were in reality torch-bearers, as they were made for holding masses of combustible material which were held in place by the central spike.

The curious lanterns that decorate the Strozzi Palace at Florence, and of which similar specimens are still attached to the angles of the Riccardi Palace, once the famous residence of the Medici, in the same city, are among, the best examples of their kind still remaining. We are informed by Vasari that these "lumière miravigliosi" were the work of one Nicolo Grosso Caparra, a celebrated artificer of the time, by whom it is not unlikely that many of the beautiful rings and cressets which still decorate the old palaces of Siena may have been executed. On the centre spike was fixed a little iron barrel, containing tow and pitch, while on each of the other spikes a torch was fastened. In some of the old engravings of the festivities given at night by the Grand Dukes of Tuscany, the representations of the effect of this mode of illumination may be seen. It is said that the privilege of affixing such cressets to a residence was one conferred by the State only on the most distinguished citizens, as a peculiar honor, in acknowledgment of services performed.

This is one of the finest examples of Italian wrought iron work still existing, and has frequently served as a model for lanterns in recent times.