The Brochure Series of Architectural Illustration, Volume 01, No. 06, June 1895 Renaissance Panels from Perugia 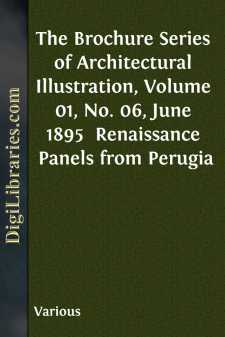 The carved walnut panels from the choir stalls of the Church of San Pietro de' Casinense in Perugia, designed by Stefano da Bergamo in 1535, which are given as illustrations in this number, are excellent examples of the ornament of the later period of the Italian Renaissance. This form of ornament was first used in flat painted panels upon pilasters, such as the well-known work of Raphael in the Loggia of the Vatican, suggested by the Roman work discovered in his time upon the Palatine. It was afterwards applied to all sorts of objects where rectangular spaces were to be decorated. Its characteristics can hardly be better described than in the following extract from Mr. C. Howard Walker's articles upon the Study of Decoration in The Technology Architectural Review:—

"The motives on the pilasters were of two kinds: the continuous scroll, starting from a strong base leaf and rising in equal volutes, with alternating direction to right and to left, and filling the panel. This motive needed always to be balanced by its opposite, and was consequently seldom used. It had its prototype in the magnificent scroll from the Forum of Trajan. The other motive was that usually used, and capable of infinite variety, that of a central axis, the ornament diverging from it symmetrically on either side. This motive was borrowed from colored decorations on the Roman walls. It is a most difficult class of ornament to handle, as so much depends upon relative distribution, proportion, and relief of modeling. The motive usually starts at the bottom and grows continuously to the top, with the base, whether a mass of leafage, a vase, or other unit of ornament, well defined and the crowning unit strong and rich. The central axis can be actual or merely evidenced by the symmetry of the sides, preferably actual. To prevent an effect of absolute perpendicular division or of stringiness, this axis, between its base and crown, is divided either by knots of ornament, concentrated masses, or horizontal motives. In making these divisions the rules of cadence need to be carefully observed; the divisions should be made equal in length, or alternate, or in sequence, and the same method should be observed in the units of ornament marking the divisions. In most cases there is more ground than ornament, which always demands that the lines of the ornament should be most carefully studied, and that the units used as terminals for these lines should be exactly disposed, in relation to the axis, to each other, and to the border of the panel. When one considers the number of factors which can enter into the composition of one of these panels, it can be readily conceived that their variety is wellnigh infinite; absolute symmetry on either side of a central axis on which are threaded units of ornament, and which starts from a mass of detail and terminates in a mass of detail; systems of radial lines diverging from the central axis and terminating in centres of ornaments of greater or less size, arranged in all sorts of groupings; garlands, pendants, and ribbons, vases, trophies, shields, birds, beasts, and nondescript combinations, foliage, conventional and natural, forms, human and superhuman, all in varying scales, all in surfaces undulating, now rising into sharp relief with clear-cut edges, now sinking and melting into the background; and the whole so carefully balanced, so exactly distributed, that no portion should be too strong for another, no detail but should be equally refined....