The Brochure Series of Architectural Illustration, Volume 01, No. 05, May 1895 Two Florentine Pavements 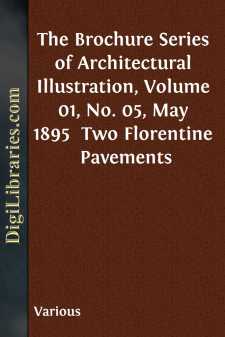 The church of San Miniato al Monte, just outside the walls southeast of Florence, and the Baptistery, or church of San Giovanni Battista, in Florence, are among the finest examples of the Tuscan Romanesque style, and both probably date from about the same time—the early part of the twelfth century—although the date of San Miniato has until recently been referred several centuries further back.

These two churches have many points of similarity, although entirely different in plan. San Miniato was referred to in the article upon the Byzantine-Romanesque doorways of Southern Italy in our February number, and Fergusson's classification of Byzantine-Romanesque was, for the time being, adopted for lack of better authority. Later writers have, however, generally agreed that there is little or no Byzantine influence in these two churches; that the delicate and refined treatment of classic forms here found is not the result of Byzantine or Greek influence, but is due entirely to the natural refinement of the Tuscan race. The same characteristic was again shown later in the treatment of Gothic detail, and is evident in the Renaissance work of this locality.

The dimensions of San Miniato were given in the February number referred to above. The interior of this church is generally considered one of the most beautiful interiors of Italy on account of its effective basilican plan with a crypt opening from the nave, its beautiful and rich detail, and its fine mosaics and decorations. The pavement is not the least of its attractions.

The Baptistery will be remembered for its famous bronze doors, the work of Ghiberti, which have given occasion for so much discussion, favorable and unfavorable. It is octagonal in plan, and 108 feet in diameter externally. It was erected originally for the cathedral of the city, but in the eleventh and twelfth centuries was so thoroughly remodeled that no recognizable features of the old building remain.

The pavements, in point of design, appear quite independent of the other ornamental work in the two buildings we are considering.

The motives of ornament are those commonly found in the stuffs, especially silks, of Sicily and the East, and their use here could easily be accounted for through connection with Sicily. It is known that the Hotel de Tiraz at Palermo, the great royal manufactory of stuffs, artistic metal work, mosaics, etc., established in the sixth century, and which continued until the sixteenth, supplied not only much of the finest textile products for all of Europe in that time, but also furnished workmen who carried with them the designs and methods of Sicilian textile manufacture to other countries. Such manufactories were established in several Italian cities, among them Lucca.

The relationship seems clear, as the forms are perfectly similar. The beasts and birds set in balancing pairs facing each other and repeated in an all-over pattern, as in a woven fabric, strongly suggest the Sicilian silks. Eug. Muentz in his work, "La Tapisserie," speaks of this evident relationship....