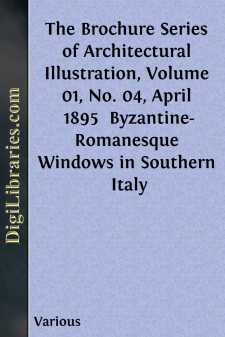 The collection of photographs from which the plates in this and the February number were selected was only recently made under the direction of Signor Boni, an official of the Italian government, charged with the care and restoration of historic monuments.

The province of Apulia has been so little invaded by the march of modern improvement, and its present inhabitants are, as a rule, so poor, that it is difficult to travel here except on the line of a few main thoroughfares, and strangers seldom visit more than one or two of the principal towns on the coast. Bari and Brindisi are known to tourists, as they are in the line of travel to and from Greece, but the inland towns are isolated in a barren priest-ridden country in which strangers are not welcome. The hardships which it is necessary to face deter all but the most adventurous even of the Italians, familiar with the language and manners of the people. Architects seldom visit this neighborhood, and little is known of its rich treasure of mediæval buildings, except through the few published works treating of it. Signor Boni expressed himself as surprised at the great amount of beautiful work scattered through this region, of which he previously had no knowledge. The opinion of Fergusson has already been quoted in the preceding article.

The mixture in the work here illustrated of Byzantine and Romanesque elements has also been referred to in the preceding article, but the special characteristics of each style were not particularly pointed out. In the present consideration the peculiarities of detail and ornament are all that need be taken up, as the views given furnish no opportunity for the study of plan or general design. The derivation of the Byzantine style was indicated in the March number of The Brochure Series in describing the Ravenna capitals there illustrated.

Byzantine conventional ornament appears to be of two types,—the one usually used in mosaics, of thin scrolls, terminating in flowers or symbols, displayed upon a ground which is much greater in quantity than is the ornament; the other, usually confined to sculpture, an intricate interlace of ribbon lines with spaces filled with Byzantine acanthus, the ornament much greater in proportion than the ground, which only shows in small separate pieces. Apart from these are the borders, occasionally of overlapping leaves, often of small repeated units, such as Greek crosses and squares and diamonds, or else meanders or guilloches. The guilloche takes a new form in Byzantine design, and instead of being a continuous succession of small circles enclosed in an interlacing ribbon, it assumes the form of alternating small and large circles, or of small circles alternating with large squares, and often progressing in both directions at once, horizontally and perpendicularly, and thus forming an all-over pattern. The roses of ornament are often incorporated into this form of guilloche. Sculpture of the human form becomes more and more feeble and crude....