The Brochure Series of Architectural Illustration, Volume 01, No. 03, March 1895 The Cloister at Monreale, Near Palermo, Sicily 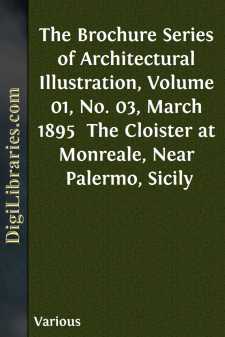 THE CLOISTER AT MONREALE, NEAR PALERMO, SICILY.

The island of Sicily, being in form nearly an equilateral triangle, with one side facing towards Italy, another towards Greece, and the third, towards Africa, was a tempting field for conquest to the various nations surrounding it. It was successively overrun by the Greeks, Carthaginians, and Romans, and later, after the Christian era, again successively by the Byzantines, the Moors, and the Normans. Almost all of the architectural remains of the older periods belong to the time of the Greeks, as neither the Carthaginians nor Romans left much to show for their occupation of the island. With the exception of occasional ruined examples surviving from the time of the Dorian Greeks who colonized Sicily, most of the monuments now existing belong to the Byzantine, Saracenic, and Romanesque periods. As would be natural to expect, the latter influences are not clearly separable one from another either in time or in locality. They overlap in all directions; but in general the Byzantine, which was the earliest and most powerful element, is found more strongly marked, and more frequently on the east coast. It however forms the groundwork and is the main ingredient of all that follows. The Saracenic work, which succeeds the Byzantine in date, found a stronger foothold in the South, on the coast nearest Africa; and the influence of the Normans appears in the North.

Every new race of masters in this frequent recurrence of conquest found the island already occupied by a very numerous population of extremely various origin. The newcomers could do no more than add their own forms to those previously in use; the consequence being in every case a mixed style, containing elements derived from every portion of the inhabitants.

Palermo, being on the northern coast, has felt the Norman influence strongly. Its architecture is principally Romanesque in form, with a generous admixture of Byzantine and Saracenic motives in detail and decoration. Exuberance of detail and wealth of color are the rule.

Under the Norman conquerors the Sicilians built as they were directed. Their arts and their civilization were superior to those of their masters, and the Normans were apparently willing to make use of this superiority, and merely adapted the forms of decoration and methods of construction which they found here in use to their own needs and purposes. The polychromatic decoration of the buildings of this neighborhood, such as the interiors of the Capella Palatina and the cathedral at Monreale, ranks among the most successful, if it be not the most successful, work of its class now in existence. It is thoroughly Oriental in character, although applied to buildings intended for Roman ritual. On account of the great superiority of the Moors in art and civilization, not only to the Normans but to all the other inhabitants at the time of the Norman conquest, in the eleventh century, many of the buildings of this period show very little Norman influence. In fact the Oriental character is so extreme in some instances, such as the church of San Giovanni degli Eremiti, that there is very little to suggest that it was Norman and intended for Norman uses....