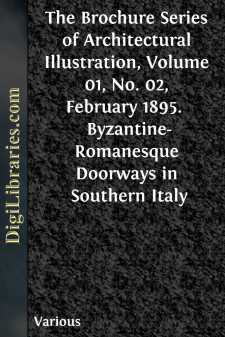 The illustrations chosen for this issue are all from the Byzantine Romanesque work in the province of Apulia, that portion of Southern Italy familiar in school-boy memory as the heel of the boot. Writers upon architecture have found it difficult to strictly classify the buildings of this neighborhood, as in fact is the case with most of the medieval architecture of Italy, although the influences which have brought about the conditions here seen are in the main plainly evident. The traditions and surroundings, of Roman origin, were modified by trade and association with the Levant through the commerce of Venice and Pisa, resulting in a style embodying many of the characteristics of both the Romans and the builders of Byzantium. Oftentimes these characteristics are so blended and modified by one another as to be entirely indistinguishable, while at other times features unquestionably belonging to the Romanesque or the Byzantine will be found side by side. An illustration of the latter condition may be seen in the two views of the doorway to the cathedral of Trani. (Plates IX. and X.) On account of the intimate relations maintained during the Middle Ages between this province and Magna Grecia, and it may be partly on account of the comparative remoteness from the principal cities of the north, the Byzantine influence is here more strongly marked than in the cities of Central and Northern Italy.

According to the classification adopted by Fergusson, the church of San Miniato at Florence is one of the oldest examples and a good type of this rather mixed style. It was built about the year 1013. It is rectangular in plan, nearly three times as long as wide, with a semicircular apse. Internally it is divided longitudinally into aisles, and transversely into three nearly square compartments by clustered piers, supporting two great arches which run up to the roof. The whole of the inner compartment is occupied by a crypt or under church open to the nave, above which is the choir and altar niche, approached by flights of steps in the aisles. This general arrangement is followed more or less closely in the churches at Bittonto, Bari, Altamura, Ruvo, Galatina, Brindisi, and Barletta. The scale of the southern churches is, however, much smaller than those of the north, the width of the nave of the cathedral at Trani being only 50 feet, and the length 167 feet, while the corresponding dimensions of the cathedral at Pisa, which is referred to by Fergusson as the most notable example of this style in the north, are 106 x 310 feet.

In these smaller churches, as far as external treatment is concerned, the main attention is devoted to the principal façade, and here most of the ornament is usually covered with a rich hood supported by pillars resting on monsters, following the custom prevalent throughout Italy during this period. Above this is either a gallery or one or two windows, and the whole generally terminates in a circular rose window filled with tracery.