The Brochure Series of Architectural Illustration, Volume 01, No. 01, January 1895 The Gothic Palaces of Venice 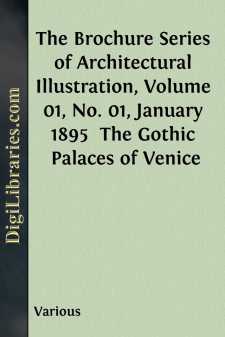 Although the Ducal Palace is much larger than the other palaces of Venice, and intended for general civic uses as well as a residence for the Duke or Doge, it follows closely the type already described. It has undergone so many changes since its first foundation in about the year 800 (813 according to Ruskin), having been destroyed five times, and as often re-erected in grander style, besides having been added to and the dilapidated portions restored, that it is impossible to assign a comprehensive date to cover the building of the present structure. In fact, the earliest portion was gradually added to, carrying it further and further around the quadrangle until it reached the point of beginning, when this process was repeated, partially replacing the older Byzantine work with Gothic and then with Renaissance, the present building still having examples of all three styles.

The portion shown in our illustration is said to have been erected between the years 1424 and 1442, by Giovanni Buon and his sons Pantaleone and Bartolommeo Buon the elder; although Mr. Ruskin states that in 1423 the Grand Council sat in the Great Council Chamber for the first time, and in that year the Gothic Ducal Palace of Venice was completed.

This angle, which faces the Piazetta and the Riva, is called by Mr. Ruskin the "Fig-Tree Angle," because of the group of sculpture representing the fall of man. The figure above the angle capital of the upper arcade is that of Gabriel. The richly decorated capitals of the lower arcade represent personifications of the Virtues and Vices, the favorite subjects of decorative art, at this period, in all the cities of Italy. The capitals of the upper arcade, no two of which are alike, are also richly wrought with figure sculpture, the one on the angle containing representations of the four winds.

The arrangement of the tracery above the upper arcade is worthy of note as the placing of the quatrefoils between the arches, which is characteristic of earlier examples, is more reasonable, from a constructive point of view, than the later practice of placing them above the centres of the arches.

The use of the rope moulding as a decorative finish for the angle of a building is also characteristic of the palace architecture of Venice, and may here be seen most effectively applied.

This is one of the most notable examples of domestic Gothic architecture in Venice, and dates from the fifteenth century. Ruskin refers to it as follows: "In one respect, however, it deserves to be regarded with attention, as showing how much beauty and dignity may be bestowed on a very small and unimportant dwelling-house by Gothic sculpture. Foolish criticisms upon it have appeared in English accounts of foreign buildings, objecting to it on the ground of its being 'ill proportioned'; the simple fact being that there was no room in this part of the canal for a wider house, and that its builder made its rooms as comfortable as he could, and its windows and balconies of a convenient size for those who were to see through them and stand on them, and left the 'proportions' outside to take care of themselves, which, indeed, they have very sufficiently done; for though the house thus honestly confesses its diminutiveness, it is nevertheless one of the principal ornaments of the very noblest reach of the Grand Canal, and would be nearly as great a loss if it were destroyed, as the church of La Salute itself."

This building is popularly known as "Desdemona's House."