The Brochure Series of Architectural Illustration Vol 1, No. 9 1895 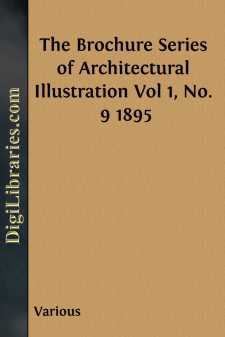 The pulpits and ambos chosen for the illustrations in this issue of The Brochures are mainly interesting for their wonderful mosaic decorations which are among the finest of their kind which have ever been executed. The work of the family of Cosmati, by whose name the Roman mosaic or inlay of this description is known, such as that in plate LXXI, is similar in design and method of execution to that shown in the other plates. There is one point, however, in which the Roman work is quite different. In Sicily and southern Italy the bands and borders of geometrical patterns are largely made up of glass or composition, while the Cosmati confined themselves to the use of colored marbles. In the south, and particularly in Sicily, gold is freely used, but this is lacking in the work of the Cosmati. As a result of this difference in material a wider range of color is possible in the southern mosaics than in those of Rome; and this is especially noticeable in the use of blues, which give much of the character to the beautiful examples shown in our plates, which we regret we cannot reproduce in color. The altar, pulpit, and bishop's throne in the churches of SS. Nerone ed Achille and S. Cesario in Rome may be taken as additional examples.

This is a form of decoration which may be found in many of the Byzantine churches of the eleventh and twelfth centuries and also in the Tuscan churches of the same epoch, notably in the Baptistery at Pisa and in the church of San Miniato al Monte in Florence.

The mosaic floors, dados, and solid railings of the Palermitan monuments all seem to belong to this class: a ground of gray or white marble slabs with large panels of colored marble, mosaic bands of geometrical pattern let into the marble, and sometimes a plain framework of one member with a carved row of conventional leaves. In Palermo a grayish veined Greek marble similar to that used in Venice and Ravenna was almost exclusively used as a background. It formed a most admirable setting for the inlaid marble mosaics which were laid in rebated panels in the marble slabs, making a perfectly smooth surface. In the floor mosaics green serpentine and red or purple porphyry are the usual colors besides the gray, while brighter reds, gold, blues, white, and a variety of other glasses (smalti) are employed with the serpentine and porphyry in the mosaics on walls, pulpits, and screens.

In all of the work referred to above, the separate pieces of marble or glass are carefully shaped to fit the patterns they are intended to form, and in this respect differ from the Byzantine and other wall mosaics, and from the earlier Roman mosaic pavements such as those which are familiar in the Pompeiian buildings. In the latter the shape and often the size of the pieces making up the pattern were of comparatively little importance, and the pieces were imbedded in a matrix which filled up the interstices and gave a background of neutral color.

The marble pavements, made up of discs, squares, and other geometrical forms of colored marbles surrounded by bands or borders of a smaller scale, were similar in design to some of the mosaics shown in our plates....