The Brighton Boys in the Radio Service 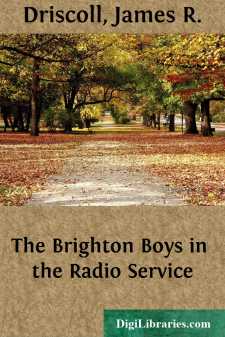 It was that old practice sentence of typists, which is as old as are typewriting machines, and Joe Harned, seated before the told-style, noisy, but still capable machine in Philip Burton's telegraph office, had rattled it off twenty-five times and was on his twenty-sixth when suddenly, very suddenly, his mind began to work.

Or rather it might be said that an idea, the big idea, danced unceremoniously into his brain, and, beginning to take definite and concrete form, chased a score of other smaller ideas through all the thought-channels of his handsome, boyish, well-rounded head.

He came to a full stop and gazed steadily at the upturned paper in the typewriter in front of him. Twenty-fives times he had written that sentence, and twenty-five times with mechanical precision and true adherence to time-honored custom he had finished it by tapping off the word "party."

He read it again, and as if it were the result of an uncontrollable impulse, his fingers began the rapid tap-tap-tap. And this time he substituted the new word that the big idea had suddenly thrust into his mind.

Joe gave the roller a twirl, the paper rolled out, dropped to the floor, and he grasped for it eagerly.

Even Joe was surprised. He hadn't realized that in his enthusiastic haste he had pushed down the key marked "caps."

In bold, outstanding letters near the bottom of the sheet was an historic sentence, and Joe Harned—Harned, of Brighton Academy—had devised it.

"NOW IS THE TIME FOR ALL GOOD MEN TOCOME TO THE AID OF THEIR COUNTRY!"

Joe gazed at it again for a moment, and then let his eyes travel across the little office to where red-headed, freckle-faced, big-hearted and impetuous Jerry Macklin was rapping away at another typewriter, and, two feet away from Jerry, "Slim" Goodwin, "one-hundred-and-seventy pounds in his stockinged feet, and five-feet-four in his gym suit," was working the telegraph key with a pudgy hand.

"Jerry!" he called. "Oh, Slim! Come over here a moment, both of you. I want to show you something."

Jerry immediately ceased typewriting, but Slim was reluctant to release the telegraph key. However, as Joe began folding the paper in such a way that only the last sentence showed, their aroused curiosity brought both of them to his side.

"Read that," said Joe, trying to suppress the quiver in his voice, and holding the paper up before them. "Read it carefully."

One lad on either side of him, they hung over Joe's shoulder and followed his bidding.

"Right!" shouted Jerry, as he came to the last word. "Joe, you're a wizard, and what you've written there is the truth."

"Ain't it—I mean isn't it?" added the delicate Slim Goodwin, and, partly to hide his grammatical error, but mostly to express his enthusiasm, he gave Joe a one-hundred-and-seventy-pound whack on the back that sent him sliding out of the chair and half way under the typewriter table....